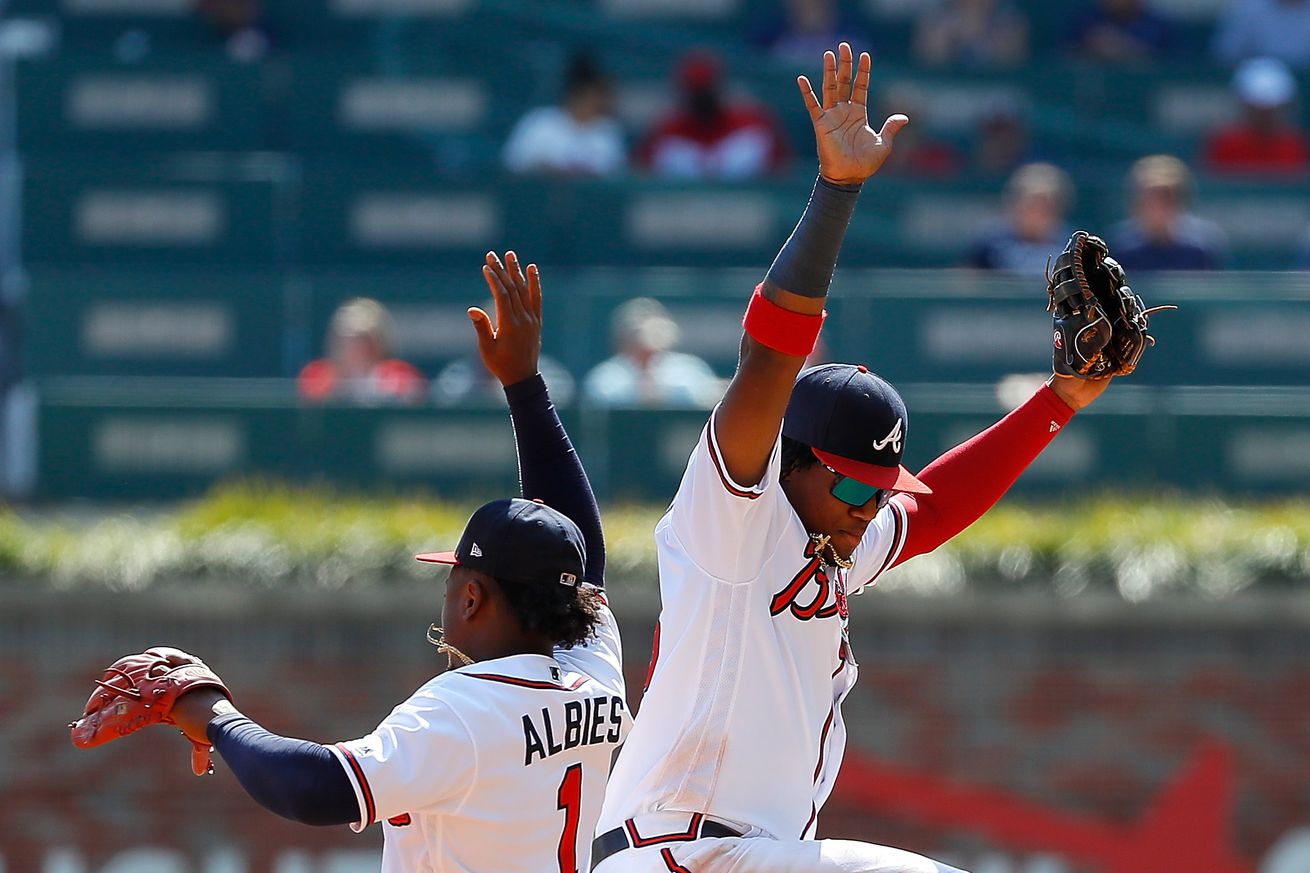 The Braves’ young star is about to do some damage to Atlanta’s clubhouse when they clinch against the Giants.

The Braves need only win game one of their three-game series against the Giants this weekend to clinch the NL East. It would be their second consecutive division title (14th overall) and, again, it would come against the Giants. Last year’s Rookie of the Year and this year’s would-be fifth member of the 40-40 club was just 20 years old when they clinched last year. This year?

Acuña on the potential of clinching tomorrow night: "last year they wouldn't let me drink because I was a minor. This year's going to be different...we're looking forward to it"#Braves @680TheFan

Acuna Jr. is just one home run and three stolen bases away from joining a club of just four members: Jose Canseco (1998), Barry Bonds (1996), Alex Rodriguez (1998), and Alfonso Soriano (2006). Before you jump to the conclusion that he’s some overrated youngster aided by the juiced ball and defensive shifts, consider the following:

Never mind. Those 39 home runs and 37 stolen bases are meaningless. He’s an overhyped 21 year old talent... bah. No. I can’t do it. Acuna Jr. is incredibly good.

In the history of Major League Baseball, he’s 16th on the list in terms of OPS+ (yes, I jumped from FanGraphs to Baseball Reference for research because it’s easier for me to do a Play Index search for this) for players age 20-21 with at least 1,000 plate appearances. In the history of the game!

If it helps, he’s been as good as Orland Cepeda and Carlos Correa. Cepeda never had more than 23 stolen bases in a season; Correa never more than 14. Hey, if you hate analytics, Acuna Jr.’s old school stolen base drive should get your blood pumping.

He has not been the best hitter on the Braves, though. Not even close. Freddie Freeman’s 140 OPS+ leads the team. It’s the seventh straight season he’s and an OPS+ of 130 or greater. For the last seven year’s actually averaged a 144 OPS+, meaning he’s been 44% better than the league average for most of the decade.

So, the Braves are really good with no apparent weaknesses. They’ve scored the second-most runs in the NL (811) and they also walk a lot (9.8% — 2nd in NL/3rd in MLB) while striking out just a little bit less often than the Giants do (23.2%).

I'm hearing #braves are taking on all the rest of Melancon's contract, about $18.3 million. Double-checking to be sure. But that's what I've heard.

The Braves did need the Giants help to strengthen their bullpen. How does that pitching staff look? Just 19th in MLB by fWAR (10.7). Slightly more valuable than the 106-loss Tigers’. It’s not just the bullpen that’s been mediocre to bad, though. That rotation FIP of 4.34 is just 10th-best in baseball, 0.05 runs better than the Padres’.

The Braves have done a lot of crappy things to get where they are now — defrauded a tax base to get a free stadium, cheated the international scouting system to get cheap talent, and continued to permit the stupid Tomahawk Chop at their games — but they had a vaguely similar situation wherein a younger exec (Frank Wren) was promoted to GM and then sort of tanked the franchise, forcing ownership to take drastic measures to fix what ailed them.

That involved bringing John Hart into the front office, and all he hdid was take three years to get the team back on track before handing it off to Alex Anthopolous, who is simultaneously winning and developing while making some sharp short-term moves. Josh Donaldson at one-year, $23 million was an intriguing one that paid off, taking on the rest of Melancon’s deal is TBD.

Since we live in an even faster time, we can only hope that the Hart term is analogous to the Evans franchise reinvention last season that seems to have paved the way for a lot of preexisting prospects to sort of supercharge their development, allowing Farhan Zaidi to simultaneously win and develop in the very near future.

No matter what, the Braves will be celebrating in front of the Giants this weekend.

I’ve named Freeman, Acuna, and Josh Donaldson, but consider this: Matt Joyce, cut by the Giants at the end of Spring Training, is enjoying his best seasons since 2016. He has a .969 OPS in 44 plate appearances in September. That includes a double and two home runs to go with nine walks. At the end of the day, we and the Giants are happier having found Mike Yastrzemski and Alex Dickerson, both of who have had better seasons, but what an interesting dynamic it would’ve been to have had a struggling 35-year old Matt Joyce on the roster through the first six weeks of the season.

Mark Melancon has racked up 10 saves since joining the Braves, but in his fifth relief appearance for them, he allowed 4 earned runs in 0.1 innings of work against the Marlins in what turned into a 7-6 loss. That could’ve been it, but just three days later, he recorded his first save for them, and since that 4-run third of an inning, he’s recorded those 10 saves with a 3.75 ERA across 12 innings of work, with no blown saves or losses.

Melancon’s Giants career was defined by intermittent success amidst a sea of frustrating performance, but the power of consistency and positive thinking permeated his very presence. Mark Melancon never gave up and he’s carried that with him to the Braves. At the same time, here’s hoping he blows just one save this weekend, for old time’s sake.

The Braves will sweep. Buster Posey will have a nice series to remind us that he’s not completely toast.

5 questions the Seahawks might deign to answer for us vs. Saints