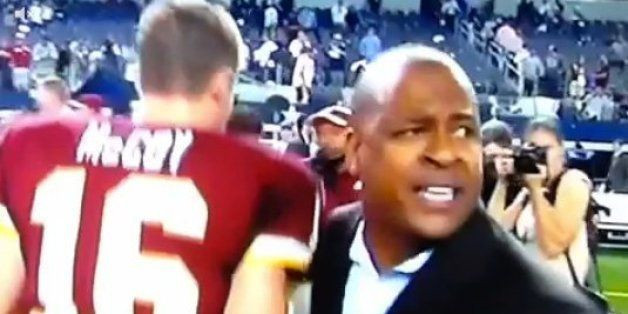 Tony Wyllie had been handling PR for the Washington Redskins for nine years as their senior VP of communications, but he’s now leaving to take a job with the Special Olympics. And while we don’t normally cover all the comings and goings of PR executives, Wyllie has made a whole lot of headlines over the years. Here’s a look at some of the most notable controversies he’s been involved in:

May, 2011: Wyllie appears on a University of Maryland ethics in sports media panel, discusses Redskins’ owner Dan Snyder’s libel lawsuit against The Washington City Paper (which was eventually dropped that September after seven months and a whole lot of legal fees) by comparing it to the Arab Spring protests in Egypt:

All we wanted was the truth, the same thing you heard up in Egypt where people were trying to find one thing — people getting hurt and beat up for one thing — the truth. And that’s what this is all about.

July, 2012: Wyllie threatens to revoke 106.7 The Fan DC’s credentials if they broadcast a Robert Griffin III press conference (which was carried by countless TV stations), which he said was about “protecting our radio partners” (the then-Snyder-owned ESPN 980).

December, 2013: Wyllie and the Redskins threaten legal action over clearly-comedic fake game broadcasts on 106.7 The Fan. Wyllie then sends an angry email to Emmanuel Benton of Pro Players Insiders for daring to make a Twitter joke about him, with the subject of “Dont EVER try to get a credential from us again.”

January/February, 2014: ThinkProgress reporter Travis Waldron writes a story on the Redskins’ attempts to defend their name, including discussion of the terrible PR consultants they worked with there (Lanny Davis, Ari Fleischer, George Allen and Frank Freaking Luntz). Waldron gets the internal discussions amongst those consultants on how to respond to his request for comment…because the eventual statement the team sent him included the whole internal e-mail thread. Wyllie then told Waldron “Lanny is working with us. These other guys, they’re not working with us. …They’re not officially hired on,” which was included in the story, and then, late on the Friday before the Super Bowl and almost two full days after the story was published, Wyllie admitted his statement was wrong.

“When I told you that the team we’re assembling to demonstrate why there is so much support for the Redskins name was not being compensated, I made a fundamental mistake — I did not check. I was wrong and they are being compensated.”

October, 2014: Wyllie screams “NO MEANS NO” on camera at ESPN Deportes’ John Sutcliffe and pulls Colt McCoy away mid-interview after a Monday Night Football game (seen above), later saying “We wanted to get Colt in to hear coach’s postgame speech…. I wasn’t denying access. I wanted Colt to hear coach talk. I felt we needed to get him inside… Right after the speech, Colt went out and did the interview. I explained the situation to them. They were happy in the end.”

September, 2015: Robert Littal of Black Sports Online and others report on tweets from an account that seems to be linked to Jessica McCloughan, wife of then-Redskins GM Scot McCloughan, accusing ESPN’s Dianna Russini of being her husband’s “side chick” and “giving BJs to get a story.” Wyllie personally calls Littal to say it was “definitely a fake account” and they’d contacted NFL security to shut it down, and also told Pro Football Talk’s Michael David Smith “Jessica McCloughan did not post the tweet, it came from a fake account, and it has been forwarded to the NFL’s security department.” Later, the team puts out a statement from Jessica McCloughan admitting that she sent the tweets and apologizing for them. Wyllie then has an incredible e-mail exchange with Kevin Draper (then of Deadspin, now of The New York Times) about all this.

August, 2016: Pete Mundo of Heartland College Sports arranges an interview with Colt McCoy through Wyllie. Wyllie then calls Mundo and rips him for asking McCoy about the 2010 BCS Championship Game (a totally normal and expected topic, especially as the interview was supposed to be about college football as well as the NFL), and also for asking McCoy if he’d let his kids play football given concussion worries (not exactly an unprecedented question!).

October, 2016: After the Redskins’ tie with the Bengals in a game in London, Wyllie recreates his on-camera interview pull-away strategy, this time yelling “NO!”, pushing a German reporter, and pulling kicker Dustin Hopkins away.

Those are a whole lot of unfortunate headlines, especially considering that many PR executives are trying to not become the story themselves. That certainly wasn’t the result during much of Wyllie’s tenure with the Redskins.

Of course, running public relations for the Redskins sounds like a terrible job in general. in addition to all the normal challenges of handling PR for a NFL team, the Redskins come with an under-fire team name and a constantly-criticized owner. (Plus, they’ve only posted two playoff appearances in the past decade, both of which were wild-card round losses.) So there certainly has been more scrutiny on that team and more criticism of it than your average NFL franchise, and some of the missteps mentioned above started with Snyder putting Wyllie in a bad place; the lawsuit against the City Paper would have been tough for even the world’s best PR executive to defend, and something similar can be said for the team’s choice to hire consultants like Fleischer and Luntz.

But Wyllie managed to make both of those situations much worse with his response, and that’s before you get to all the other stories listed above where his involvement was a central part of the issue. We’ll see how Wyllie’s replacement does, and if they make as many headlines as he did.

The post Redskins’ PR boss Tony Wyllie exits after nine years with the team and a whole lot of controversies appeared first on Awful Announcing.

Neck Sharpies: Whose Gap Is It Anyway?