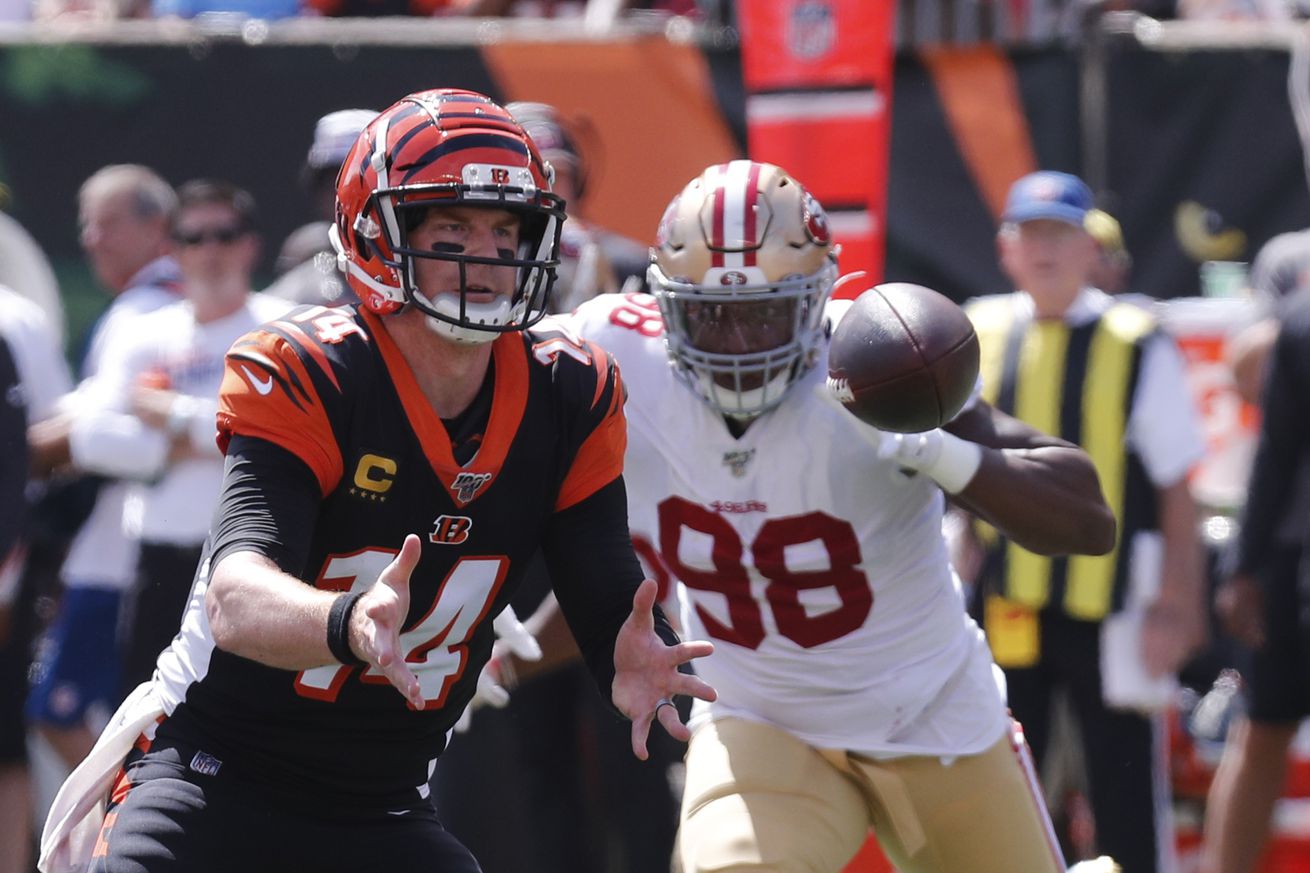 The 49ers’ defense continued their impressive start to 2019 in Cincinnati, helped by Ronald Blair reminding us all of his quality

With the arrival of Nick Bosa and Dee Ford, Ronald Blair was the forgotten man for many in the defensive line rotation. Despite an effective 2018 campaign, the team added two players at his position, seemingly denying him the chance to start in his contract year.

Nevertheless, as he has done since being drafted 142nd overall in 2015, Blair continues to demonstrate his qualities. Robert Saleh clearly loves the former Appalachian State Mountaineer, singing his praises at press conferences. On Sunday, Blair reminded 49ers’ fans of what he brings to the table.

In Cincinnati, Blair was a monster against both run and pass, though he particularly showed his quality as a run defender. Significantly he made a serious case to get more reps as a “starting” defensive end in base packages. When teams came out in heavier formations, they seemed comfortable blocking Dee Ford in particular with a tight end. Blair showed on Sunday that this would be impossible with him at the defensive end position. He bullied the Bengals’ tight ends all game long.

With the Bengals in the red zone in 12 personnel, Blair has D gap responsibility. He blasts across Tyler Eifert’s face, forcing Joe Mixon to bounce outside to Kwon Alexander, who should have made the stop here. Blair spins off Eiftert, showing impressive work rate to help Dre Greenlaw finish the play off.

Once again, down in the red zone, Blair is responsible for blowing up this run play. The 49ers are in their 5-1-5 goal line package and Blair is responsible for the C-gap. Once again matched up with a tight-end (C.J. Uzomah, 87) he launches him into the backfield and onto his back, blowing up Mixon’s running lane and forcing him into the waiting Fred Warner, K’waun Williams and Richard Sherman.

Blair’s sack showed the problems offenses face with the wide 9 as well as the soundness of the 49ers’ coverage behind. The Bengals tried to leave a tight end into block Blair on the play action. His alignment makes it extremely difficult for a tackle to sell play-action and make the pass block. Blair absolutely destroyed him, showing his power and then ripping beyond him. The linebackers meanwhile read it was pass quickly, gaining depth and passing off the deep over route. Ahkello Witherspoon showed real patience at the top of the screen, staying square, not biting hard on the corner-fake and topping the route. Jaquiski Tartt and Williams took away the check downs. Perfect defensive execution.

Blair’s tight end-busting form was also important in allowing the 49ers to counter the Bengals’ RPO game that worked effectively in Seattle.

Normally, the 49ers set the 3-technique to the same side as their SAM linebacker/nickel corner in what’s known as an over front. Against Cincinnati, they often flipped this, instead having the bubble (the uncovered gap between their nose tackle and the defensive end) to the strong side of the formation. This specifically ensured the defender who would normally have a backside run fit (often a safety) no longer had a major role in run defense, ensuring he was in no conflict in run-pass option situations. He could play pass all the way.

To steal a gap to the strong side of the formation however, the team needed to rely on the likes of Blair and Armstead to dominate the Bengals’ tight-ends, essentially two gapping. It was notable how instead of playing directly into a gap in such looks, the defensive end would aggressively engage the tight end. K’waun Williams had a run fit, but the reality was that the strong side defensive end was the key player in allowing the 49ers to steal a gap on the strong side to free up a backside defender against RPOs.

The 49ers have set their 3-technique to the offense’s weak side. As a result, you can see Jaquiski Tartt in the corner of the screen preparing for a possible pass coming from the Bengals’ left in case of play action or a quick RPO, instead of having to take the backside B gap. In order to steal a gap on the front-side, Blair essentially two gaps, blasting Matt Lengel into the backfield quickly. He could shed him to the inside if Mixon ran that way, but he cuts outside and Blair is able to shed easily to make the TFL with Williams.

The 49ers show their favourite cover 3 shell pre-snap. Accordingly, off play action, Dalton anticipates his tight end would likely get open running the over route in behind the linebackers in front of Tarvarius Moore. However, the 49ers were playing quarters. Tartt rotated back post-snap and Warner barely reacted to the play-fake. Warner’s depth ensured he and Tartt bracketed Uzomah before Tartt undercut the route. Forced off his first read, Dalton had no time to reset, with the pocket having already disintegrated. Disguise, coverage and pass rush meshed perfectly.

Alexander’s pick was a spectacular play. It also encapsulated much of the good and bad of the 49ers’ performance against Cincinnati. Saleh called a five man pressure with 3-3 in coverage behind. It’s a match-up zone coverage, and Tartt disguised his position pre-snap, helping the 49ers to threaten a blitz from their left. Instead, the blitz comes from the 49ers’ right side. With a running back and two offensive linemen trying to deal with three rushers on that side (instead of three offensive linemen vs two rushers on the other side), Nick Bosa stunts through the A gap to flush Dalton.

There was a lot of good to take from this performance by the 49ers defense and it will be interesting to see how they do not against a veteran QB, but a QB who has no film on them whatsoever in Pittsburgh’s Mason Rudolph.

WATCH: Dak Prescott with a TD on the keeper, Cowboys up 24-6

5 takeaways from the 49ers’ win over the Steelers