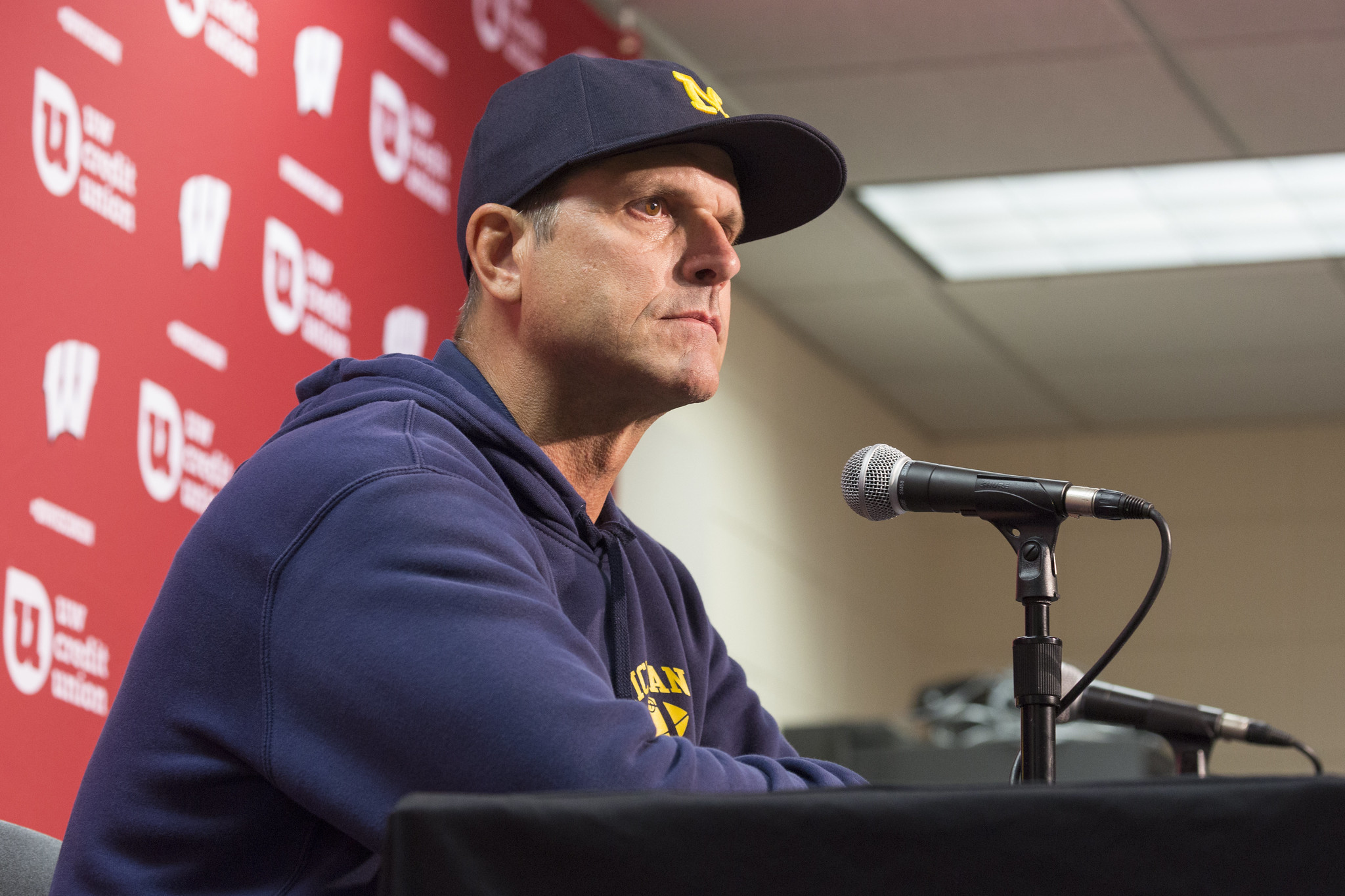 [Hi, everybody. I dusted* off the headphones and transcribed this because we figured you'd be pretty interested in reading what was said chronologically with all the proper context a little more than FBO. There's still going to be FBO, but it'll run tomorrow. Also, our own David Nasternak went all the way to Madison to obtain this audio plus I've done this a few hundred times, and it wouldn't be nice to make David go all that way for nothing. You know the feeling.]

[*That's not even true. I used my headphones a couple days ago to transcribe an interview for an in-progress profile, but that doesn't give the first sentence the same zip.]

Jim, Nick [Eubanks] was just in there saying the offense does not have an identity yet and it’s going to take time to get—his word—fluent in this offense. Where do you think this offense is right now? And obviously you didn’t have the ball that much.

How do you explain that? Both teams were off last week. Having the extra time to prepare, why didn’t Michigan look as prepared?

“Um, yeah, we were outplayed…outprepared and outcoached. The whole thing. I mean…both offensively and defensively, that was thorough. We knew it about their team. They’ve got the ability. They’re good enough and if they play good enough they’re good enough to beat you thoroughly, and that’s what happened today.”

Josh [Metellus] mentioned that they had some different schemes than they did last year running with Taylor. In terms of the line play, what did you see as the difference? You guys weren’t able to be as successful as you wanted on the line.

“Again, I think…I mean, their ability to block and tackle was really good today. And there were holes inside and we shut those holes off inside. He had the ability to bounce them to the outside and controlled the game with the running game—easy to see that—and make the big plays as well. It was impressive.”

Jim, you mentioned establishing the run game. You guys were not able to do that. Was that by necessity or by choice? What happened?

[After THE JUMP: the Mason wrinkle, going downfield, Gattis as a play caller, why McCaffrey started the second half and an injury update]

Can you talk about what you were looking for with Mason at running back the first series and how detrimental was that fumble given the emphasis you’ve put on ball security?

“Uh, yeah, it was in the scoring position. That was another really good play by them. The tackle was right on the ball and the ball came out. Started working Ben at—he’s worked some at tailback and we were working him especially this week, and that was unfortunate.”

Was that a depth issue or just a different wrinkle with him carrying the ball?

What was the difference late when you were effective attacking downfield?

“Made some plays downfield. Both Nico [Collins] and Tarik [Black]. Shea got the ball—we threw some deep balls and made some plays. Guys kept fighting.”

Are there any concerns right now with Josh [Gattis] as a play caller? Is there anything that needs to be sorted out before you can get that identity you’re looking for as an offense?

“Uh…no. It’s a team effort offensively. Defensively, we didn’t play our best, no question about it. They played really well. So we come back and we’ve got a lot to fix.”

What do you want the offensive identity of the football team to be?

When you say outplayed, outcoached, outprepared. how difficult is it for you to admit that? Is it sort of a gut punch for you as a coach and for the staff?

Dylan [McCaffrey] came in to replace Shea [Patterson]. Was that just for this game or is that position going to be open going forward?

“Shea was being evaluate at halftime and then we put Dylan in to start the second half.”

Something is extremely broken in this football program and has been for almost a decade and a half.  The question is does Manuel really try to figure out what it is or does he just keep things the way they are.  Just getting rid of Harbaugh is not going to fix what has been broken for almost two decades.

I know that there have been threads about this, but there is just something off with Harbaugh and this whole team.  He just seem . . . off.  No emotion, no fire.  Every time we get dominated, it's the same thing:  we got out- coached, out-prepared and out-played.

To some extent, I get it - what else is he going to say.  But at this point, it's like groundhogs day:  Play a good team, come out COMPLETELY flat, get blown out, look completely lost in the process, and then sit in the presser spaced out with the same mantra of "out-coached, out-prepared, out-played, need to tacked and block better."

That hit on Dylan and the subsequent reaction of the Wisconsin fans was the most classless thing I’ve ever witnessed inside a football stadium.  They gave the player that hit him a standing ovation and loudly booed the call.  Totally classless.

As a lifelong Michigan fan living in the state of Wisconsin, I can tell you this is par for the course. They are some of the biggest fair weather fans I've ever seen. If the results had been opposite they would have moved onto the Packers already, as it is, every smug fan is going out of their way to make today a badger holiday.

They really only care when they're good.

I just don't understand the mystery around Charbonnet and we can't seem to get a clear answer from anyone. Is he hurt or isn't he?

He’s not going to say 30+ carries in week 2 vs Army aggravated some lingering issues but it may have something to do with his suddenly limited workload.

Ugh I was literally in the process of saying "Let's give Dylan the start against Rutgers, if this season is going to be a letdown at least let's give the QB of the future some reps" and then BAM concussed.

How many times is he going to be outcoached before he does anything about it?

They had a bye week and that's what they have to show for it.  Improvement week my ass, this is pathetic.