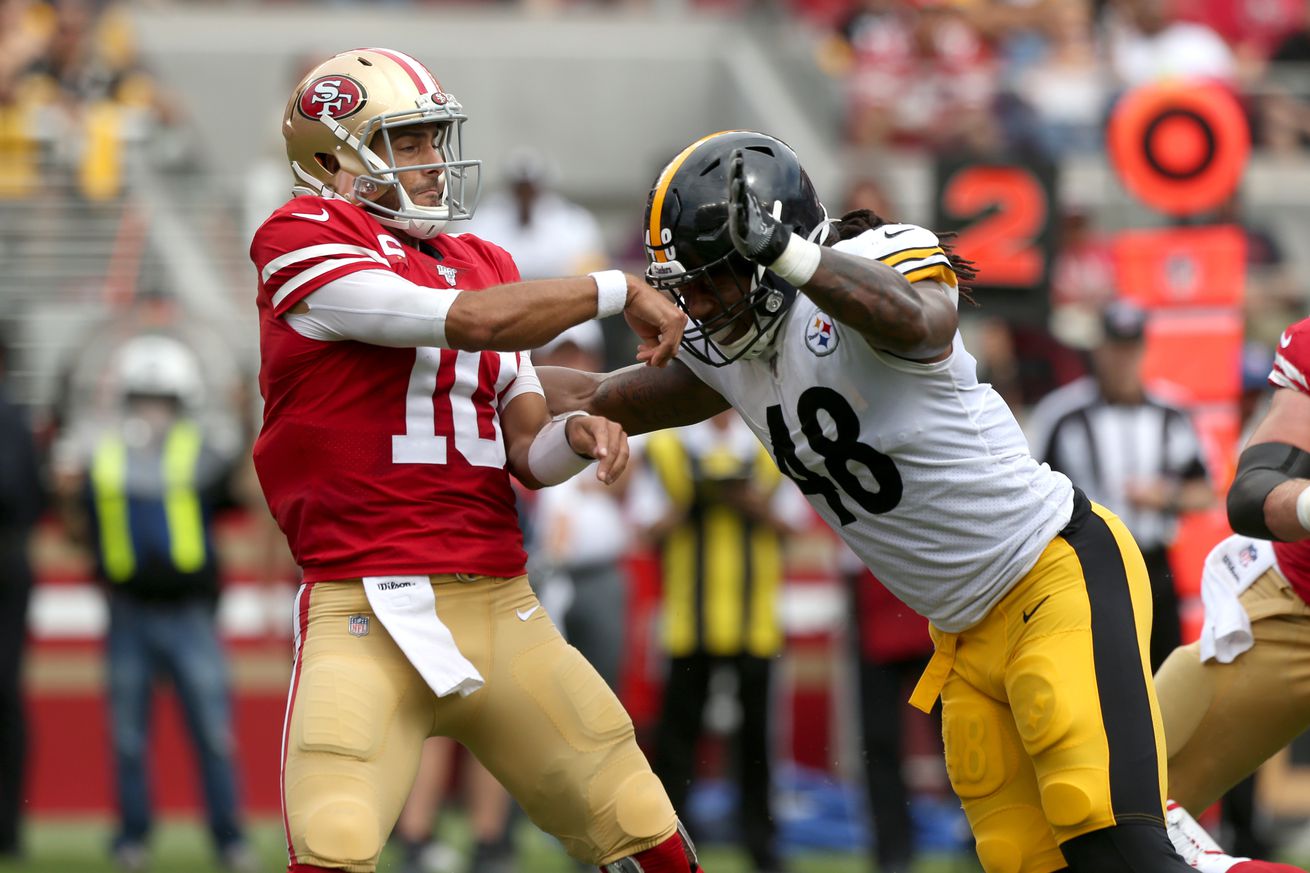 Richard Sherman wins the award for best press conference from the San Francisco 49ers’ victory over the Pittsburgh Steelers. There are a few things we’ll get together, but there was one quote he had about Jimmy Garoppolo.

Despite only taking one sack, the Steelers defense got their licks in on Garoppolo throughout the game. The fourth quarter, in particular, had him getting smashed left and right after several passes. It’s good for him to get these due to the knee (helps with the mental part, or so I’m told), but it sounds like he doesn’t mind because Sherman said that Garoppolo “likes getting hit.”

“He [Garoppolo] loves it, he loves it, he’s strong, and he’s persevering. He likes getting hit. I don’t know why. Not every quarterback likes it, kinda wakes him up. It didn’t bother him throughout the game, he stayed poised, especially on the game-winning drive.”

You’re probably wondering why it’s good. Well, for one thing, after everything Garoppolo went through, you might worry he’s afraid of getting popped which induces that happy feet term I keep seeing everyone say. The other reason? Well, something Steve Mariucci said in The Brady Six always rang in my head every season with quarterbacks.

The film was on the quarterbacks taken before Tom Brady in the 2000 NFL Draft (Brady went in the sixth round). That year, the 49ers were also looking for a quarterback and took Giovanni Carmazzi in the 3rd round. The Patriots and 49ers met in that year’s Hall of Fame Game, and the film indicates you saw the differences in quarterbacks immediately. That’s when Mariucci said this:

“When you get out on the field, and the other team wants to knock your head off, they got to be able to handle that mentally and emotionally. Some do, some will love it, and some that makes them very nervous and they lose some confidence.”

Garoppolo has taken some hits and injuries. It’s never a question on if he can sustain it, but when I heard Sherman say Garoppolo “likes getting hit,” immediately, Mariucci’s quote rang into my mind on the guys who love it.

No need to worry about happy feet.

Dale Earnhardt Jr. once offered $1M of his salary to help Hendrick Motorsports

Kyle Shanahan on Dante Pettis: He earned it