The Browns Are Not Ready to Contend 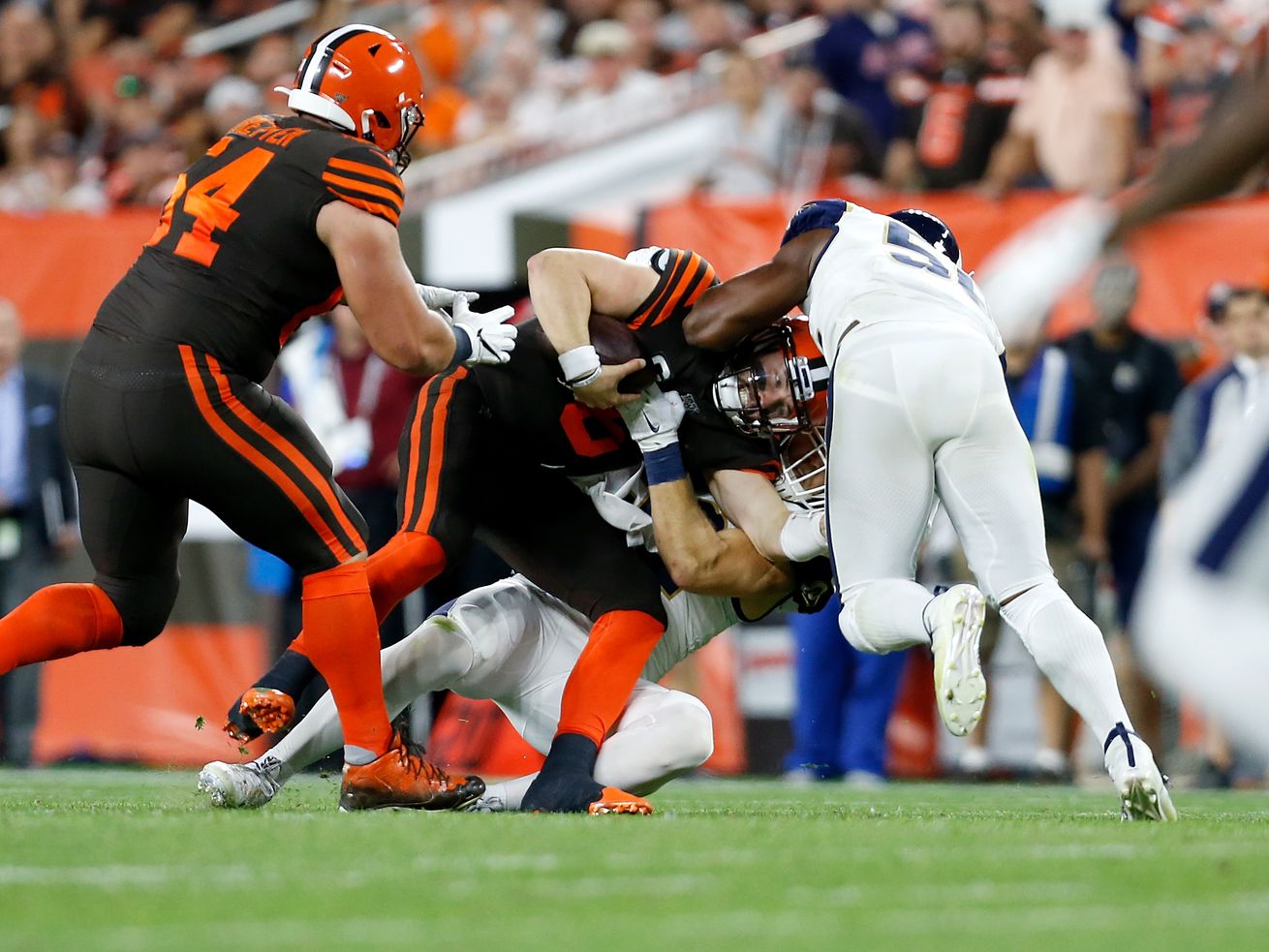 After falling to the Rams, Cleveland is now 1-2, with their only win coming against the Sam Darnold–less Jets. Baker Mayfield and Co. have plenty of kinks to work out.

Nothing has summed up the Browns’ 2019 season quite as well as what they did on their third-to-last possession in Sunday night’s game against the Rams. Down 17-13 with 9:19 left in the fourth quarter, Cleveland faced a fourth-and-9 on L.A.’s 40-yard line. Since the team needed a touchdown to take the lead—and a field goal try from that spot would be from 57 yards—the Browns went for it. But, somehow, the team that took Baker Mayfield no. 1 overall and traded for Odell Beckham Jr. in the offseason ran … a draw play. Running back Nick Chubb picked up 2 yards.

This had absolutely no chance:

Cleveland went on to lose, 20-13, and it’s now clear that the squad that entered 2019 with as much fanfare as any team in the NFL is still very much a work in progress, particularly on offense, as evidenced by that egregious play call. On a night when the Rams put up a Super Bowl–esque three points in the first half and looked off their game offensively, Cleveland could not capitalize and fell to 1-2. It’ll only get harder from here, too: The Browns’ next four opponents (the Ravens, 49ers, Seahawks, and Patriots) all have winning records.

There were other coaching issues outside of the draw play. Faced with a fourth-and-goal from L.A.’s 4-yard line with 33 seconds left, Freddie Kitchens called a timeout to regroup and set up their next play. This might seem like normal game management, but it was a disastrous error: With all three timeouts, Cleveland would have been able to stop the clock three consecutive times and potentially force a Rams punt should their fourth-down attempt not be successful. But by going down to two, a failure on fourth down meant the Rams would be able to burn out the clock. And that’s exactly what happened.

But the Browns didn’t lose this game because of a couple of poor coaching decisions. Once again, quarterback Baker Mayfield spent the bulk of his night evading defenders, facing pressure on 46 percent of his dropbacks, per Next Gen Stats, and taking three sacks. And while some of that was his fault (he frequently bailed from the pocket even on plays when his protection was competent), Aaron Donald and the Rams defensive line broke through enough to make Mayfield’s jitters understandable. It all adds up to the same underwhelming performance for the second-year quarterback: He attempted just two deep passes (more than 20 yards downfield) on the night and completed only 50 percent of his total passes: 18 of 36 for 195 yards (5.4 yards per attempt), one touchdown, and one interception.

The pressure that defined Mayfield’s night was especially apparent on the aforementioned fourth-down play that decided the game. Mayfield never really had much of a shot of converting this:

There’s a chance that he could have stepped up into the pocket and maybe even scrambled down the field, but it’s hard to blame him for trying to evade the defenders who had been in his face all night. Every quarterback is better when kept clean than when under pressure, but what’s odd is that Mayfield has been pretty good in both scenarios up to this point. Going back to college, Mayfield has been incredibly effective when pressured. In his rookie season he was roughly middle-of-the-pack in those situations, but this year he’s been among the worst in the league:

Given Mayfield’s history of excellent play under pressure, Browns fans should have hope that their quarterback’s recent play is just a small-sample-size fluke, and that he can bounce back down the stretch.

The Browns do deserve some credit for keeping this game close, and especially for knocking the Rams off their offensive game. Cleveland came into the game with its entire starting secondary—both corners and both safeties—inactive. Yet Jared Goff finished a fairly pedestrian 24-of-38 for 269 yards (7.1 per attempt), two touchdowns, and two picks. The Rams’ normally lethal outside zone running game was held in check: Todd Gurley and Malcolm Brown combined for 50 yards on 17 carries, an average of just 2.9 per tote.

If the Browns had had their starting secondary or had strung together one or two more successful drives, they could have walked away with a win over the defending NFC champions. Even with their struggles, the Browns still had that chance to get a touchdown and potentially tie or take the lead late. Mayfield echoed that after the game:

Baker Mayfield says the Browns are going to get it fixed. pic.twitter.com/PjASXZaER2

But with just one win over the lowly Jets, the Browns look far from being contenders. There’s a lot to fix.