The Winners and Losers of the 2019 Emmy Awards 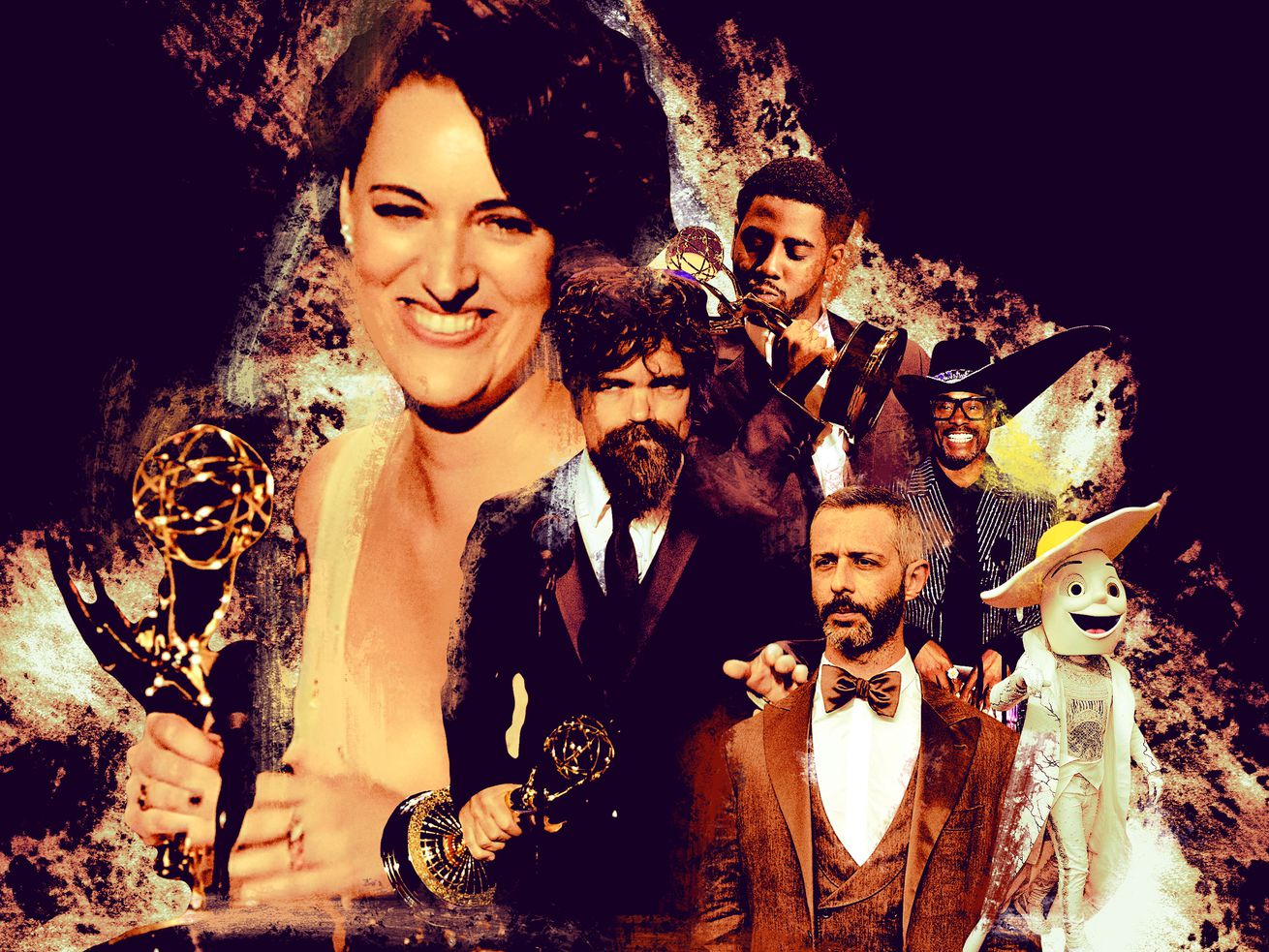 ‘Game of Thrones’ had a good (but also bad) night, and Phoebe Waller-Bridge and Billy Porter had an even better one

The 71st annual Emmy Awards have come and gone. For those hoping that the underwhelming returns from Game of Thrones’ final season would hinder its chances to dominate the evening … we have some good news. (Also, you should probably forget about that petition to re-do the whole season.) It might not have been a great night for those from Westeros, but it was a victorious event for fans of Phoebe Waller-Bridge. Below, we break down the biggest winners and losers from Sunday night’s ceremony.

When Fleabag was nominated for 11 Emmys in July, the fact that it was even recognized felt like a victory for the series. The Marvelous Mrs. Maisel had a pricey, Amazon-backed Emmys campaign, while Veep’s dominance in recent Emmys history seemed likely to continue (not to mention Julia Louis-Dreyfus, after recovering from breast cancer, had the chance to break the record she shares with Cloris Leachman for most acting Emmys ever). But the Emmys zigged for once! While Maisel took home wins for Outstanding Supporting Actor and Actress, Fleabag and star-writer-creator Phoebe Waller-Bridge was the most shocking repeat winner of the evening, taking home wins for Outstanding Comedy, Outstanding Writing, Outstanding Directing (for Harry Bradbeer, who’s an Adorable British Man), and Outstanding Actress. For a show largely recognized as one of the best—if not the best—programs of the year, Waller-Bridge and Fleabag have surpassed expectations, and the Emmys are at least making some judicious choices.

Coming into this year’s Emmys with 32 nominations—a single-year record for one television program—Game of Thrones was riding a wave of momentum on Sunday night. It didn’t seem to matter that critics and audiences were disappointed with the haphazard storytelling choices and the occasional stray coffee cup on screen—this was the show that seemingly everyone watched on Sunday nights, a communal experience that feels more and more difficult to replicate. (Not to mention, the scale of Thrones’ production was more akin to something from the Marvel Cinematic Universe.)

But in the end, Thrones only captured two Emmys from the televised awards: a fourth Best Supporting Actor win for Peter Dinklage and Best Drama Series. Winning one of the biggest awards of the night is a worthy salve, but the HBO series should feel disappointed that all its pre-ceremony hype was squashed with awards doled out to the likes of Succession, Ozark, and Pose. It makes you wonder what would’ve happened this Sunday if Thrones’ final season wasn’t nearly as contentious.

On the other hand, the fact that all that final-season controversy didn’t prevent Thrones from nabbing the ultimate Emmys prize does nothing if not reaffirm the show’s immense influence in its category. Arguably the worst—at the very least, the most poorly written—season of Game of Thrones still beat out the rest of the competition. It was an enormous show, and the Emmys couldn’t not recognize its power.

The thing about going hostless—which the Emmys did on Sunday for the first time since 2003—is that all of that extra time has to go somewhere. (Or, you know, they could make awards shows shorter [gets shot with poison dart by television executive].) And unfortunately, the Emmys’ lack of a unifying presence resulted in the show leaning hard into bits that just weren’t … working. Ben Stiller did a bit with wax figures; Adam Devine did a bit with dancing; Maya Rudolph and Ike Barinholtz did a bit about LASIK eye surgery. There were, of course, some exceptions—Phoebe Waller-Bridge and Bill Hader are lovely and should share the screen again under some other circumstance. But, like, c’mon, nobody in that Emmys audience wanted to help Ken Jeong with his TikTok video—and nobody at home wanted to watch it go on for ages.

The Emmys has an imperative to make sure the proceedings have some kind of personality, but often the strongest results come from not forcing it too much: The best recurring bit of the night was former Reno 911! star Thomas Lennon as the Emmys “color commentator” (“They’d probably film Fleabag on the moon if they felt like it,” he quipped on Amazon’s deep pockets). After such mixed results, the Emmys might be looking for a host next year, but if they don’t, Lennon should be welcomed back with open arms.

Billy Porter already won the Emmys from the red carpet …

... but his night got even better when he claimed his first Emmy for Outstanding Actor in a Drama for his work in Pose—which also made him the first black gay man to win an Emmy. “It took many years of vomiting up all the filth I’d been taught about myself, and half-believed,” Porter said in his acceptance speech, quoting James Baldwin, “before I was able to walk on the earth as though I had a right to be here.” Porter certainly has a right to be here, and his ascendence in 2019 has been one of the year’s best stories.

If you didn’t know that Fox hosts a demonic singing competition series with masked (C-list) celebrities in garish costumes, well, you do now. The judges panel—as well as a handful of the new costumes for the second season, which premieres on Wednesday—swarmed the Emmys red carpet, to the extent that you might’ve mistaken the Emmys for dystopian singing contest sponcon. Then, when Tim Allen was introducing the Emmys vote counters, one of them was Thingamajig—a bizarre, kinda plaid-suited monster from the show’s upcoming second season. It’s The Masked Singer’s world, and we’re just living in it—which means we’re living in hell.

Loser: The Number One Boy

gotta assume he got blackmailed into this pic.twitter.com/xG3TkdHnG5

When multiple actors/writers/directors from the same show are nominated in the same category, that’s usually a good sign that the Emmys will favor your series for some of the top awards. But the flip side of all that attention is that votes might get split among the nominees, opening the door for somebody else to win. Time and again, that happened on Sunday night, with Mrs. Maisel’s Tony Shalhoub beating out three Barry actors for Outstanding Supporting Actor in a Comedy Series, Ozark’s Julia Garner winning Outstanding Supporting Actress in a Drama Series against four actresses from Thrones, and Jason Bateman winning a directing Emmy for Ozark in a category where three episodes of Thrones were also nominated. In the end, only Peter Dinklage (Thrones), Jodie Comer (Killing Eve), and Alex Borstein (The Marvelous Mrs. Maisel) were able to overcome being nominated alongside a fellow cast member.

That doesn’t take anything away from anyone who won on Sunday night. It is, however, a bitter irony that, despite Thrones’ and Barry’s popularity in certain categories, it doesn’t hurt to be the sole person nominated for a series in a packed field.

There weren’t a lot of genuinely beautiful moments on Sunday night, but Jerome’s winning Outstanding Lead Actor in a Limited Series was one of them.

Jharrel Jerome thanks "The Exonerated 5" in his acceptance speech for #WhenTheySeeUs #Emmys #Emmys2019 pic.twitter.com/1T94C5RHTl

Fox Entertainment CEO Charlie Collier said in August that the Emmys would “salute” the big-name shows that had left the airwaves—a.k.a. Game of Thrones and Veep—and, man, he was not lying. Both shows were given separate video tributes, after which the shows’ casts took the stage to the sort of standing ovations usually saved for, like, Kirk Douglas. (There was also a memoriam for a handful of other shows coming to an end, including The Big Bang Theory and Jane the Virgin.) It was an odd spectacle, not only because the tributes then awkwardly segued into awards presentations, but because it felt so clear that the Emmys were forlornly bidding adieu to some of the last shreds of the monoculture. That’s all well and good—Thrones and Veep are legendary—but the underlying message in honoring them is that the future is much more confounding, much more fractured, and much less momentous. There’s never been more quality TV than there is in 2019, and yet the Emmys (and probably many TV execs) are already nostalgic for the past.

Can NFL Refs Do What Analysts Never Could: Get Coaches To Pass More?