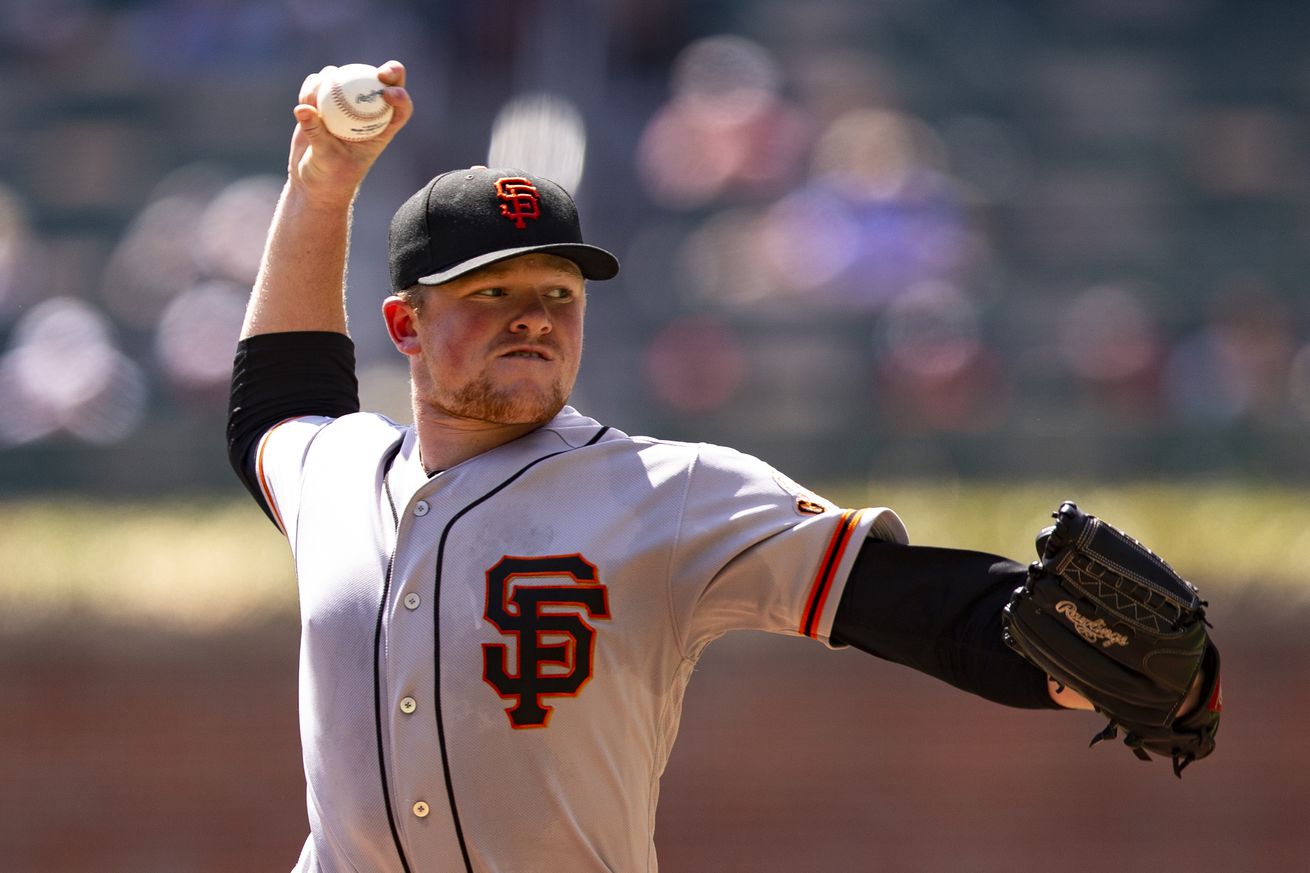 The rookie was impressive, Evan Longoria delivered some big hits, and the Giants salvaged a game in Atlanta.

As rough as Logan Webb has looked recently, he’s still managed to flash excellent stuff. What’s been missing is location and probably a bit of sequencing. That will happen with any rookie and what seems to separate the above average players from the replacement level players is their ability to adjust and the time it takes them to do so.

Except for a blip in the 4th and 5th innings, Webb was in control this afternoon. He looked like the prospect we saw in his first start and we saw him keep it together even after those blips. He had thrown just 40 pitches an out into the 5th inning and had Matt Joyce in an 0-2 count before throwing four straight balls to walk him, and then walk the next batter, Tyler Flowers, on six pitches.

Those were two of just five 3-ball at bats Webb had on the afternoon and the only two that ended up with the batter reaching base. Two of the other three were against Freddie Freeman, one of the best hitters in the entire sport, and they ended in groundouts. I’ll grant you that Freeman appears to be hurt, but how many times have we seen a rookie pitcher sink his own day by walking batters. Pitchers need to have the confidence to challenge hitters even when they get behind in the count and even if the batter is Freddie Freeman, and Webb did just that today. He didn’t make his situation worse, that’s for sure.

The other 3-ball count of the day for Webb was against Dansby Swanson, who actually got ahead in the count 3-0 before letting Webb throw two 92 mph fastballs basically down the middle of the plate (perhaps just a bit away). That second “let go” might’ve been a tactical mistake, but then again, Webb had started to overthrow that fastball since about the 4th inning, so it was nearly a tactical mistake on Garcia’s part to call for the high cheese.

I’m not sure if the pitch would’ve been called a strike had Swanson let it go, but a high fastball that was thrown up and reasonably close to the zone — it was a perfect pitch in a risky situation.

Webb’s stuff blazes in stark contrast to Dereck Rodriguez and Andy Suarez, and it’s why he’s definitely an arm you think of both for the 40-man roster and the rotation when you start considering next year’s team. Rodriguez and Suarez jumped out last year to stabilize the Giants’ meager rotation, but Webb’s 94 mph fastball- 84 mph changeup- 86 mph slider combo really plays better in the modern game.

I’m not sure if Webb figured out Billy Hamilton or if the Giants coaches finally did after Hamilton registered the Braves’ first hit in the third inning. For some reason, the Giants scout have insisted that they pitch him away. I think the temptation is that he’s quick enough to turn on the inside pitch. But he doesn’t. Billy Hamilton is not a good hitter, except when it’s against the Giants.

Maybe it’s because of his small size, but a lot of those pitches away wound up being location mistakes in the middle of the plate. I’m not going to go back to every plate appearance Hamilton has had against the Giants, but the approach from yesterday to today seems to have been the same: pitch him away. Webb was able to get him out by pitching him in. Maybe our long national nightmare is finally over and Billy Hamilton is not guaranteed a big series whenever he faces the Giants.

Evan Longoria has had a terrible September. Coming into today, he was hitting just .182/.276/.273 in 76 plate appearances. He’d struck out 21 times including 7 of his prior 20 plate appearances. He went 2-for-5 with 2 RBI and zero strikeouts today but it didn’t look like he had done anything remarkably different at the plate. It looks like he was able to take advantage of some location mistakes by the Braves pitchers.

That’s why baseball is so maddening. I didn’t perceive any sort of change in Longoria’s approach or even his swing, but couple that fact — meaning, his swing has been as good as it has been all season — with simply being pitched differently and you have completely different results. The only other area we can’t really quantify is the mental approach. Maybe he was pressing in that Boston series, maybe that wasn’t the case today.

The game started with the Giants firing line drives all over the field and coming up absolutely empty. It was not a banner day for the juiced baseballs, which wound up helping both Keuchel and Webb, but it did make the Giants’ first inning and a good chunk of the game feel a little bit frustrating. Of the 21 hard hit balls in the game, 13 were hit by the Giants, including 7 of the 10 balls with an exit velocity of 100+ mph.

It’s a reminder that pitchers make mistakes all game long and batters really do knock the crap out of a lot of pitches throughout the course of the game. By Statcast’s count, Dallas Keuchel gave up 12 hard hit balls. He came into the game with a 36.8% hard hit rate on the season. The Giants put 19 balls in play, meaning that in today’s game they had a hard hit rate of 63.2%.

So, it was a good day, and one that moved Bruce Bochy back to 1,050-1,050 as the Giants manager. He won’t wind up with a +.500 record for his overall career, but maybe his current team can be scrappy enough to get him one last positive on his Hall of Fame record.

All of Daniel Jones’s Passes From His First Start, Ranked