Pascal Siakam can be a star or trade chip for the Raptors. Which will it be? 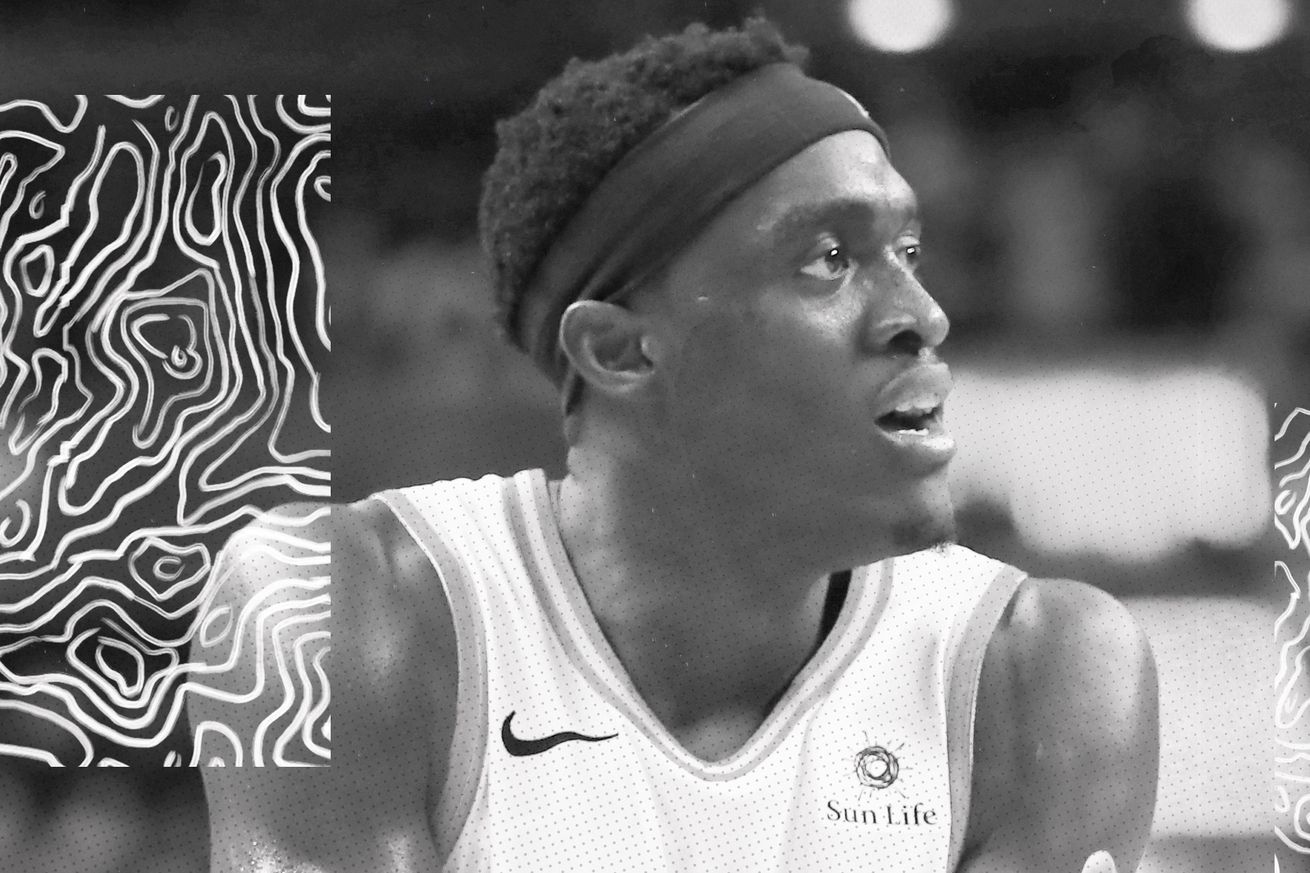 Siakam is the biggest piece in the Raptors rebuild.

Siakam is full of possibility, in Toronto or elsewhere.

Where the Toronto Raptors go from here is one of the most thought-provoking questions filtering through the NBA right now. It neatly dovetails with another: What, exactly, is Pascal Siakam?

During the Finals I wrote a column about Siakam’s postseason struggle and how it may inform his future. This was before the Raptors won a title, Kawhi Leonard signed with the Los Angeles Clippers, and their roster for the 2019-20 season was pieced together. As of this writing, Siakam is eligible for a contract extension — worth up to $170 million — but no agreement has been made, presumably because his $7 million cap hold lets Toronto keep him and still have enough space to afford two max players (either via a trade or free agency) next summer.

The Raptors obviously value Siakam. They’ve kept him out of trade talks and allegedly refused to part in what could’ve been a blockbuster deal involving Paul George, Russell Westbrook, and Leonard. Now, Siakam is the key for a title defender that isn’t positioned to defend their title; a franchise that has one of the most unpredictable short and long-term futures in an increasingly unpredictable league.

I initially wanted to write a column about Siakam as low-key the NBA’s juiciest trade chip. A small part of me still believes moving him may be Toronto’s wisest long-term option — more on that later — but an isolated argument for it ignores how exceptional, fascinating, and attractive Siakam can still be on his own. It also seems a little ridiculous. (If Michael Jordan walked away from the Chicago Bulls after their first title, would they turn around and trade Scottie Pippen?)

As we steer into a season in which an abnormal number of teams think they can win it all — a belief ironically inspired by Toronto’s own run — hawking Siakam as a missing piece to the highest bidder may either pay dividends or be a colossal embarrassment. He combines the air of accomplishment with untapped potential. That’s rare enough to make moving on from him a non-starter. It also means there are teams out there that should be willing to pay the farm to get him. But before we explore what lies ahead, let’s glance back at the past.

Siakam’s third season was a 104-game recreation of the chest-buster scene from Alien. While not altogether unexpected, as it was happening you still could not believe what your eyes were telling you. He ran away with Most Improved Player on a roster loaded with multiple All-Stars, complicated egos, and grand expectations. None of it stopped him from excelling in areas that burgeoning stars either can’t or don’t. He blocked corner threes. He filled lanes. He spotted up in the corner. On both ends, he lined the paint’s edges with the instincts of a predator, and managed to stay within the confines of his own ability while also showing a willingness to stretch out and see what exactly those limitations were. Toronto would not have worked if he didn’t do what it needed him to, but it also wouldn’t be what it became if he didn’t pile more and more food on his plate.

In the playoffs, Siakam finished second on the Raptors in PER and usage percentage. The crowning moment was a 32-point waterfall (on 17 shots!) in Game 1 of the NBA Finals NBA Finals (The NBA Finals!).

All wasn’t gravy, though. Postseason opponents had no trouble figuring Siakam out, and his best moments came when the other team loaded up to slow down more established names like Leonard and Kyle Lowry. Meanwhile his individual matchups were particularly arduous: Jonathan Isaac, Joel Embiid, Giannis Antetokounmpo, and Draymond Green might be the most challenging gauntlet ... ever? Siakam’s points per shot plummeted — missing a bunch of open threes will do that — but the playoffs are all about struggle when tasted for the first time. Though it may not be fair to expect him to have a reliable Plan B, Siakam’s Plan A was flummoxed too easily in games that actually matter.

Siakam is the key for a title defender that isn’t positioned to defend their title.

Green aspects of his game make it tempting to indict Siakam for Leonard’s decision: If he made Leonard’s life 10 percent easier in the playoffs would free agency have gone another way? In an alternate universe Siakam fulfills a cleaner basketball destiny as Leonard’s sidekick for the next five years, growing in a role tailor made for his game’s strengths and weaknesses. Instead, we may soon see Siakam lead his own team.

Heading into Year Four, he’s an evolving, ideal chess piece built for a multi-positional future; still better utilized in some situations than others, he can comfortably blend into just about any style, beside any personnel grouping, without disrupting either. That’s wonderful news for a team that will explore razing its aging championship core in favor of a fresh start. At the same time, with Leonard in L.A., the Raptors either need Siakam to immediately assume fresh, difficult responsibilities he’s never handled before, or let him progress at his own speed and hope they can somehow acquire another star sooner than later.

Based on how quickly Siakam has progressed since he first picked up a basketball, both paths may be the same thing. Either way, he’ll have the ball in his hands more often than he did last year — when he ranked fourth in front-court touches — and be asked to attempt and assist more shots in a role that’s more congruent with that of a traditional star. Pick-and-rolls haven’t been in his job description, but they may be going forward.

Siakam can amplify a team’s confidence. It’s a mystery whether he can supply it single handedly. What we do know is that Siakam was self-reliant last season. He scored efficiently in isolation and in the post. Just under half of his 519 baskets were unassisted — at a slightly higher percentage than Jimmy Butler and slightly lower one than Jayson Tatum.

Those numbers suggest Siakam will be able to adapt his game to a larger role, but they ignore the fact that he also took advantage of so much attention drawn by his talented teammates. Be it during this season or the one after, Kyle Lowry will either play for a different team or not be Kyle Lowry. He turns 34 in March. Same deal for Marc Gasol, who turns 35 in January. Leonard, who had five pairs of eyeballs glued to his body whenever he put the ball on the floor, is already gone. What will Siakam look like as his offense’s focal point, night after night?

Life as an imposing, self-sufficient scorer is one thing, but having teammates depend on you, directly and indirectly, is another.

Watch every one of Siakam’s assists as a cog in last year’s framework and the first thing that pops out is how quick his mind works. So often he’d catch a pass and then immediately whip the ball along to a teammate he somehow knew would be open. At full speed it’s a poetic connection, the type of play that can make Gregg Popovich’s eyes well with pride.

He was so comfortable in the chaos of transition — a subtle and encouraging indication that the game was slowing down for him — but very few of his assists were set up by his own action. Siakam’s assist and pass percentage was low among all players who averaged at least seven drives per game. Hopeful glimpses shone through here and there:

(He racked up 66 assists in the playoffs. Nearly a third of them were to Leonard.)

But more often than not Siakam’s most impressive playmaking was a byproduct of his teammates’ heavy lifting.

Of course, just because he didn’t initiate offense last season doesn’t necessarily mean he never will, or can’t already. For an optimistic view of how Siakam can look as the sole spearhead of an offensive attack, imagine him as Greek Freak cosplay. Both players have a moon-landing stride and inescapable wingspan, but instead of turning defenders into puffs of dryer lint with brute strength and violence, Siakam glides through the other team like a goldfish who can’t be caught with bare hands. Any general manager could do a lot worse than surrounding him with three-point shooters and smart defenders. That team is fun, and if Antetokounmpo leaves the Eastern Conference and the ostensible holes in Siakam’s game fill out, they may be able to achieve even more.

But those are tough bets to make with so much on the line, and more star power is inevitably required if the Raptors want to have a run like the one they just had. To get there, do they keep Siakam, hope he blossoms into a regular All-Star while other assets (OG Anunoby, Fred VanVleet, Chris Boucher, their draft picks) become enticing enough for a seismic trade? Or, do they get scared off by the possibility of wasting Siakam’s prime on a string of 45-win teams that flame out in the playoffs, ever conscious that they exist in a city that’s consistently rejected by the NBA’s top tier?

It’s here where Masai Ujiri may see the writing on the wall. If so, the list of buyers won’t be short. Siakam’s market value will never be higher than it is right now. Every contender (again, there may be more of them than normal) will be interested, as will the rung below that wants to take a dramatic and immediate step forward. For example what if it’s January, the Raptors are fighting just to get into the playoffs, and the New Orleans Pelicans throw Lonzo Ball, Nickeil Alexander-Walker, Jaxson Hayes, and more than a couple future Los Angeles Lakers picks at them?

Siakam makes sense everywhere, and even on a max contract he’s young enough not to push any timelines ahead of schedule. What if the Thunder exceed expectations and start day-dreaming about Siakam and Shai Gilgeous-Alexander as a tangible duo that’s more attractive to their fanbase than all the draft picks they currently own? The Atlanta Hawks could be a very aggressive suitor, too.

Toronto’s whole situation is bittersweet, and dark parallels to the 2011 Dallas Mavericks are impossible to ignore, from the decision to surround one Hall of Famer with hungry, intelligent veterans familiar with playoff pain, to the depressing come down of an unfeasible title defense. The Mavericks haven’t won a playoff series since. Toronto doesn’t have to battle in the Western Conference, but that doesn’t preclude them from organizational lethargy.

Do they offer Lowry, Gasol, and/or Serge Ibaka new contracts, hold what they have together for as long as possible, grind around the margins, and then hold their breath until someone like Stanley Johnson has an epiphany? Do they cash out before this year’s trade deadline and set their sights on a genuine rebuild? Do they balance in-between in some sort of happy purgatory and operate with the type of patience only a championship can afford?

Whatever their course, Siakam, as one of the NBA’s 20 most important players, will be at the center of it all.

The Brewers Have Defied The Odds

WATCH: Phil Mickelson is here to help Tom Brady with his calf woes