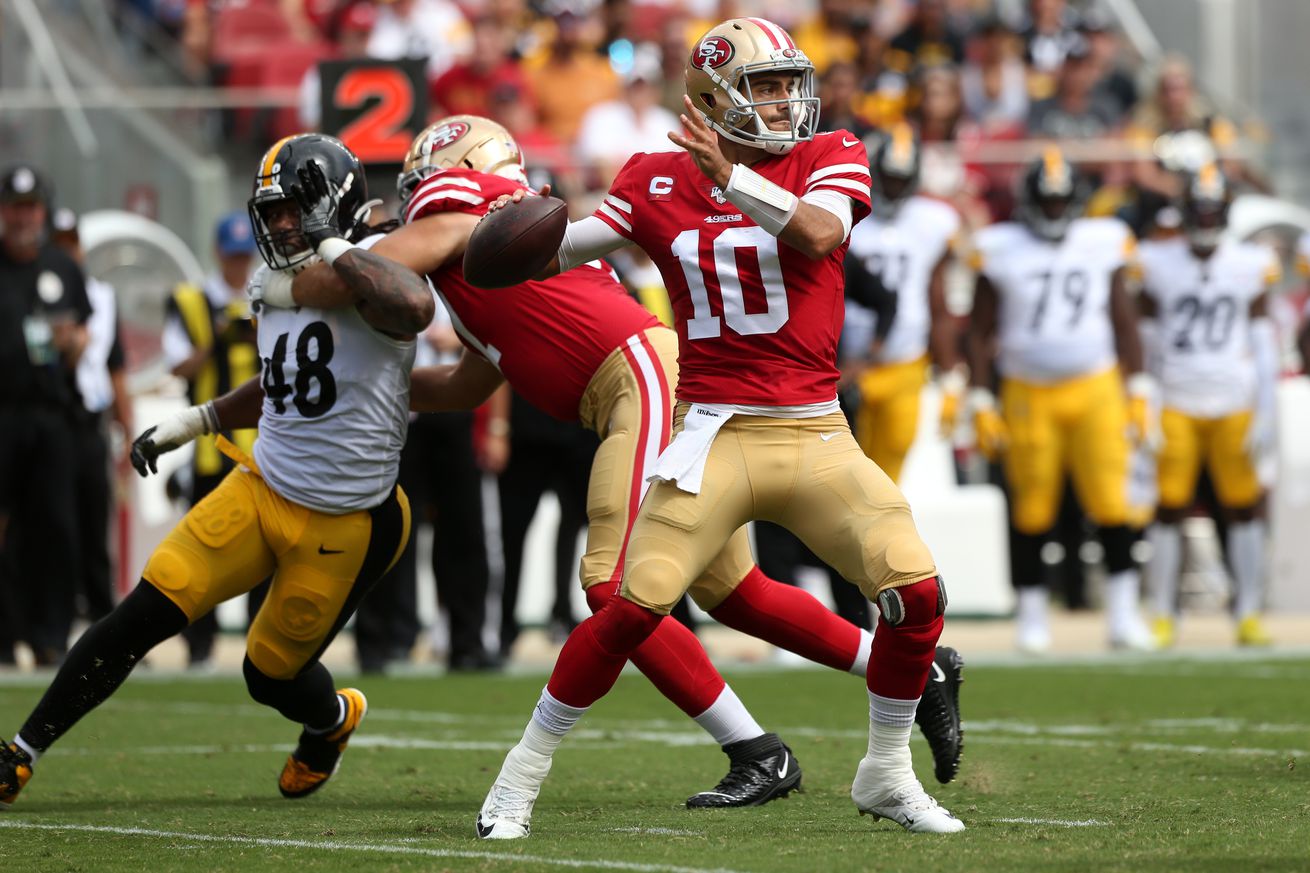 The numbers may say otherwise, but he showed up where it mattered.

I’d love to have a one-week respite on this Jimmy Garoppolo contract, is he or is he not, the remnants of the quarterback “controversy.”

But we all know I won’t.

Jimmy Garoppolo’s final stat line for Sunday’s win over the Pittsburgh Steelers was 23 completions on 32 attempts (71.88 percentage), 277 yards, one touchdown two interceptions, two fumbles, a sack, and a passer rating of 82.4. His yards per attempt were 8.66—which is very Jimmy G-like.

We’ll be breaking things down this week on the good and the bad, but looking at that stat line, besides the godly completion percentage (70 percent is pretty decent), there’s not much here. Two interceptions? Two fumbles? An 82.4 passer rating?

This is a classic case of “Stats lie, tape doesn’t.” And on tape, Garoppolo looked good. The highlights are above Jimmy G plays, and you can watch it here if the DMCA biscuits want to be behind the times and block it.

The first interception may not have been directly on Matt Breida’s hands, but I will argue it until the day I die that that was all on Breida and not on Garoppolo. The Dante Pettis interception is another one that you can blame Garoppolo on—and I’d agree to a point. At the same time, Pettis has to make a play on that ball, and he needs to put better effort on that catch. Every throw from Garoppolo isn’t going to be in the perfect window, right on the money like so many elitists think it needs to be.

So that takes care of the picks.

One fumble to bring up is the muffed snap that bashed into Richie James. This had all of us groaning, and Garoppolo took the blame for it after the game, though if he gets it, you can argue in the comments. I don’t have a good counter for that one. The other was a stupid snap that never should have happened. So on those four turnovers, one of those you can place squarely on Jimmy G’s shoulders, the others are a group effort.

So that’s one turnover. But the one thing that should be noted? The fact that Garoppolo is cold-blooded. The 49ers forced a fumble on the Steelers and the next thing you know, here’s Garoppolo throwing darts to get the 49ers near the goal line and hitting Dante Pettis of all people for the game-winning touchdown. It was so clutch and so ice cold.

I love me some Nick Mullens, but could he do THAT?

If you want to say Garoppolo played a lousy game, feel free. I disagree, but there’s ammo to make an argument. I think Garoppolo played one of his best games, to be honest. Especially up to the final drive where he had a mentality that appeared to me as a gunslinger throwing on their helmet with an annoyed sigh and saying, “Give me the [site-decorum ball] I’m going to [site-decorum] go take care of this.”

That’s why he’s the man and why the 49ers paid him all that money last year. Now let’s watch highlights.

The NBA Has New Tampering Rules, but Does it Really Want to Enforce Them?