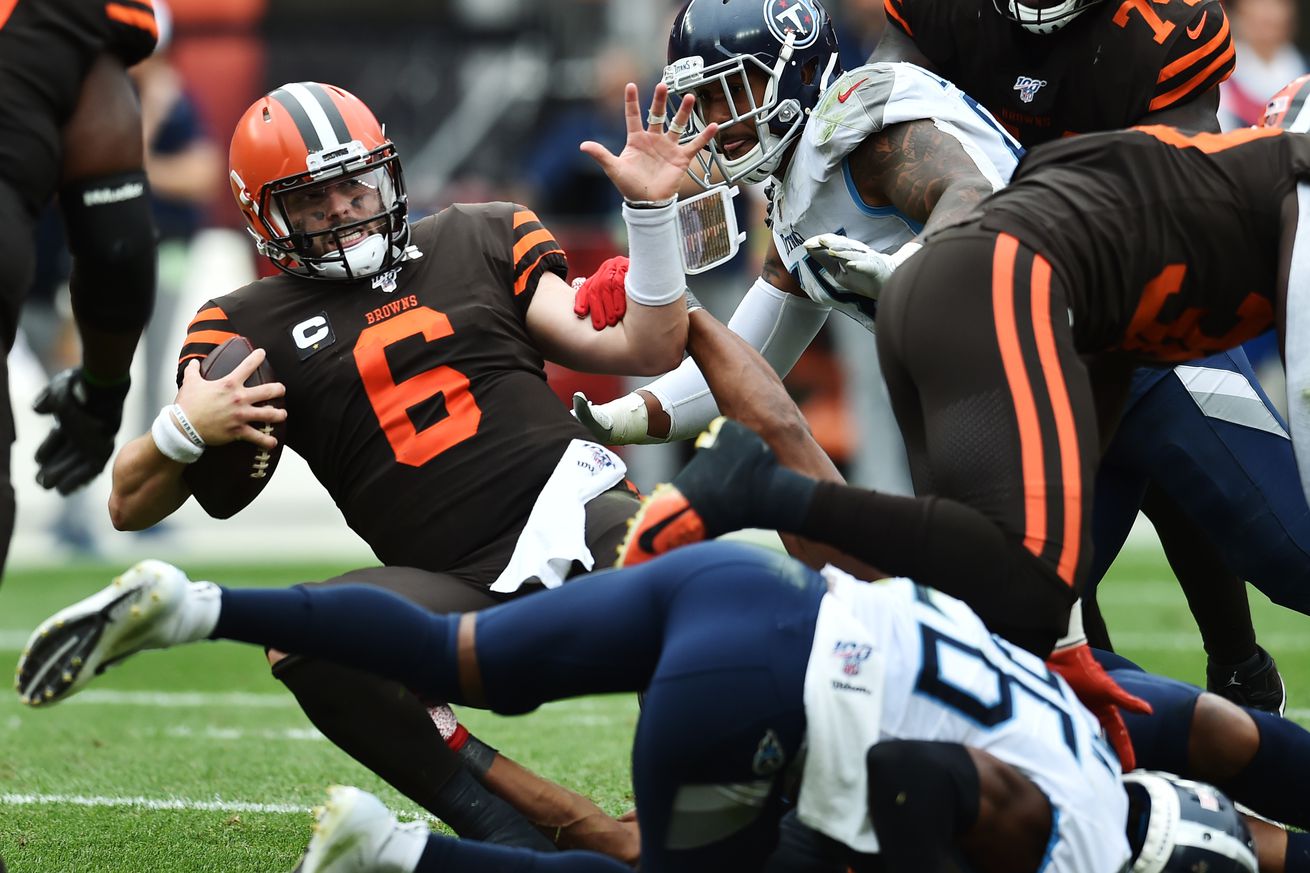 The Titans and Browns are giving up a lot of sacks, but the OLs are only partially to blame. Retired NFL lineman Geoff Schwartz explains what is happening.

All sacks are not created equal, contrary to public opinion. Yes, the majority are on offensive linemen, but not all.

Sacks can be on the quarterback, a missed block by the running back, some excellent coverage, a free rusher, etc. Often it’s hard for the masses to watch a game and determine who’s at fault, which leads to “this offensive line is the worst” groupthink, when the film shows something different.

Pass protection is a symphony. It requires all parts to sync up to make music. There’s a protection scheme called, and designated players who linemen block. If an additional player is in the protection — like a running back or tight end — they have defenders to block too. Even the quarterback has defenders to account for.

Tied into the protection is the footwork and timing of the quarterback. The QB can take a “three-step drop,” also known as a quicker pass concept. The ball should be out fast and the line blocks accordingly. A deeper drop requires the QB to drop to 9-9.5 yards, then climb the pocket to make the throw. Anything deeper, and there’s an issue. A play-action pass takes time to develop. Offensive linemen adjust their style of blocking to account for the play action.

Those are just a few examples of many that show pass protection is a coordinated effort, not just the offensive line protecting.

When a quarterback loses trust in their pass protection unit — even when it’s warranted — they start to see ghosts in the pocket. Quarterbacks feel pressure that isn’t there and unnecessarily scramble or take a sack in the pocket, when some subtle movement may be all that’s needed to open up a throwing window. They lose confidence in their game and it shows on film. That’s especially true of two teams in the NFL right now.

Those are the Browns and Titans.

Both of these offensive lines get torched in the media — and while they have struggled at times — they’ve been better than they’re getting credit for. The Titans have allowed 17 sacks, the most in the NFL, and the Browns have allowed 11, which is tied for fifth-most. But, it’s not that simple, my friends.

According to Pro Football Focus, the Titans and Browns rank 10th and 11th in pass protection. They’re not the “worst” units in the league as some have claimed, and I’ll show you why.

Baker Mayfield and Marcus Mariota are doing their linemen no favors

Both teams’ starting quarterbacks hold the ball forever, which is due to a combination of a few factors.

Titans starter Marcus Mariota takes the sixth-longest to throw the ball. Baker Mayfield is 10th in time to pass. How does this happen when these offensive lines are considered so poor?

Most often, the better quarterbacks throw the ball quickly, as they have great play design to avoid pressure and also understand that a blocking unit can only hold up for so long. All of these factors are contributing to the offensive lines being blamed for the Browns’ and Titans’ passing games issues.

In Week 1, the Titans beat the Browns, 43-13. And yes, the Titans got after the Browns offensive line and their quarterback. That first game has affected how Mayfield operates in the pocket. Here are a few examples.

In the following week’s game against the Jets, the Browns were near the goal line facing a third down. The Jets only sent three pass rushers. The protection was outstanding and there was a Browns wide receiver running open on the bottom of the formation. But rather than sticking in the pocket, Mayfield ran away. He doesn’t trust the protection to give him time to make the throw.

Here’s a sack allowed by the left tackle. The snap came on the 32-yard line and Mayfield dropped all the back to the 43 (maybe even 43.5), which is at least one yard too deep. Linemen block on angles and know the quarterback shouldn’t be any deeper than 10 yards.

The right guard initially struggled, but recovered to allow room for Mayfield to step up in the pocket. Instead, Mayfield got sacked. While the left tackle was still partially at fault here, if Mayfield just did what’s called for — stepping up in the pocket — he doesn’t get sacked.

Here’s another great example of Mayfield not trusting his offensive line. The right side of the line handled the twist with ease, and there was a pocket for Mayfield to step up to make this throw. You can see it between the right guard and right tackle. Stepping up would allow him to throw the ball on time and in rhythm. But he bailed and it was incomplete.

As you can see, there’s a lack trust in Cleveland between the quarterback and his pass protection unit. It can improve with practice and building confidence after good plays.

Now let’s give our attention to the Titans, who are turning way too many pressures into sacks.

Once an O-Lineman loses his block, the QB, receivers, coverage, and play call will determine if the play results in a sack.

The Titans O-Line hasn't been THAT bad at pass blocking, but 40% of Marcus Mariota's pressures have become sacks, by far the highest percentage in NFL

Like he mentioned, there’s blame that belongs on the Titans’ offensive line. It was especially bad against the Jaguars, with nine sacks allowed. Five happened because offensive linemen simply got tossed. That’s a problem.

However, four out of those nine sacks were on the quarterback, as Mariota held the ball way too long. No one was open and he had no confidence in finding an outlet. Take this play as an example.

This was well blocked, but no one was open. Instead of the timer going off in his head, Mariota casually moved himself into a sack. No bueno.

This one looks like it’s on the offensive line, but it’s not. It’s on Mariota and the play caller.

These are just a few examples of how pass protection is a coordinated effort and not all sacks are on the offensive line. Try to pay attention this weekend and see if you can tell the difference when your quarterback is sacked.

Where Ad Astra went right and where it went very wrong

NBA Preview: Why You Should Watch the Miami Heat This Season

No, Nicholas Castellanos Is Not Getting a $100 Million Contract