The 49ers defense is playing at an elite level 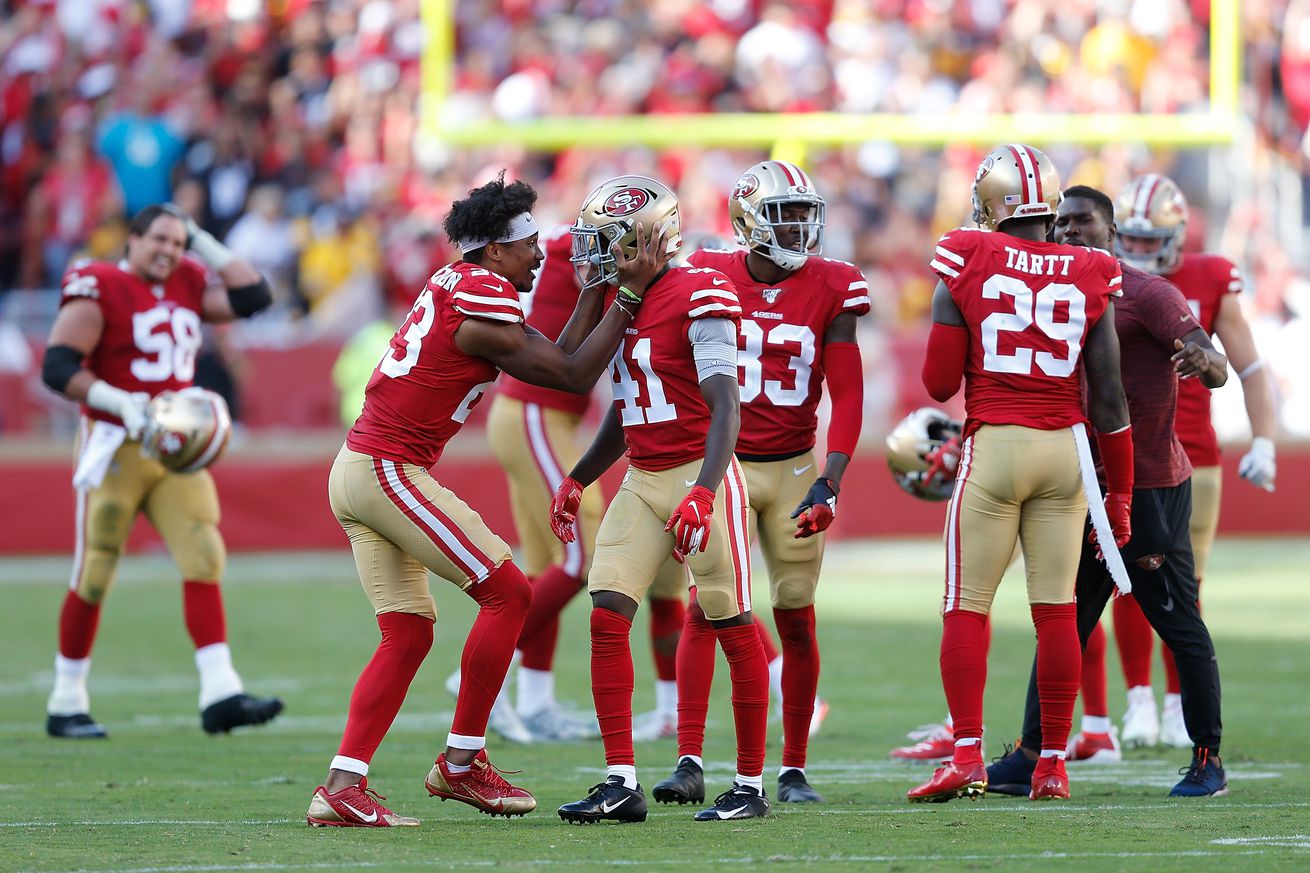 Reviewing the Steelers game, and how the 49ers defense deserves more credit

Last week’s version came out a lot more clean and digestible, so I’m going to stick with that. The only EPA references will be for Jimmy Garoppolo and Matt Breida, who is performing like a top running back through three weeks. Other than that, we’ll just talk about the game.

EPA compared to the rest of the league

As a refresher, here is “expected points added” defined:

The value of any individual play can be calculated as Expected Points Added (EPA), the difference in EP before and after a given play. Having EPA as a currency allows all sorts of different play results and events to be compared apples-to-apples, taking into account the fluctuating value of yards and downs as the other changes. And this allows for really interesting analysis when applied on a holistic level. For example, EPA shows that a “staying ahead of the chains” run of 4 yards on first down is most often a negative play. The rare exceptions include plays at the outer end of field goal range.

Despite the turnovers against the Steelers, not much changed for the 49ers this week. Through three weeks, they’re still playing like one of the best teams in the NFL.

If you’re unfamiliar with how to read this, you want to be in the quadrant that’s the opposite of the Dolphins, so, the top right.

There were 71 offensive plays for the 49ers on Sunday when you take away penalties and kneel-downs. Here are the personnel groupings and success rates for each.

The offense used pre-snap motion 63% of the time. They used 58% Week 1, and it got up to 71% against the Bengals. When you how much the 49ers move before the snap to their opponents; there’s no comparison. It’s remarkable how a simple motion can screw with the defense and lead to a successful play.

Shanahan does a great job of getting creative with 21 personnel. Take the touchdown to Dante Pettis at the end of the game. The 49ers were in an empty set, but they were in 21 personnel. That allowed Pettis to matchup against a linebacker. It’s little matchup advantages that lead to big plays. Shanahan will pick your base defense apart.

It’s a different story when there are three wide receivers on the field. There are far too many plays where the wide receivers aren’t getting any separation. If they aren’t schemed open on play-action, it was a struggle to shake free. Shanahan deserves some of that blame. There were some head-scratching route concepts near the goal-line.

Kyle Juszczyk is a difference-maker for this team. His contract, I know, I know. It probably comes off as a broken record, but when Juice is on the field, the offense is better. It’s simple.

Breaking down the box score

Here’s what I put together from the game. Going down the line, whether the 49ers offense or defense has the ball, the down, and distance, yard line, if the offense was in shotgun, personnel, and so on. P/A stands for play-action.

You can sort it and filter through the data. As you can see, Shanahan called the same play four times in a row. The best play-callers have no issues with going to the well when something is working. You’ll see plenty of times where an offense has a good play, and you won’t see it again for two quarters. Not the 49ers. That happened a couple of times during the game and has all season. If the defense can’t stop it, why go away from it?

Garoppolo was accurate on 26 of his 30 attempts, with one throwaway. 86% accuracy will give the 49ers a great chance to win every week. What made this arguably his best game as a 49er was Jimmy G’s willingness to stand tall and deliver a strike as a defender is breathing down his neck. Garoppolo took some shots, but each time it turned into a first down or a big play for the offense. He threw for 14 first downs, and he should have had two more if not for drops.

After Sunday, guess who is a top-five quarterback?

Garoppolo is getting more and more comfortable. If I wanted to nitpick, I wish he’d be a half count more patient in the pocket, as he had a couple of plays where a wide receiver was coming open, and he got rid of the ball. Efficiency and rhythm matter as well, so I understand why he’s getting the ball out of his hands quickly.

Route of the game

The best route goes to Dante Pettis, who ran a simple “stick” route. He had the defender hopping the other way, then, for good measure, shook him again after he caught the ball.

That is the Pettis we expected to see in the first two games. It’s nice to see him get an opportunity. It’s tough to replace Trent Taylor, who was placed on the injured reserve, but giving Pettis a two-way go only makes him more dangerous.

That play worked so well, Shanahan came back to it for the game-winning touchdown.

Garoppolo was under pressure on ten of his 33 dropbacks. He wasn’t under that much pressure the first two games, but he also didn’t play a defensive line as talented as the Steelers. Justin Skule was doing well until the announcer mentioned he was doing well. Then the fourth quarter came, and Skule committed three penalties and gave up a quarterback hit.

Players have bad games. It happens. If before the game I told you that Skule would be the best tackle in this game, there is no way you’d think the 49ers would have won. My guess is this was the worst game of Mike McGlinchey’s life. T.J. Watt beat him a couple of times, but it was Stephon Tuitt that gave him problems.

Richburg was a winner for a reason. Going an entire game where you only get beat once is tough to do against any NFL team, let alone a team with the amount of quality defensive linemen the Steelers have.

Kittle may be a better blocker than some linemen that start in the NFL.

Toilolo has this reputation for being a good blocking tight end, but every time he’s in the game, he gets beat.

Juice! Thirty-eight snaps when he was asked to block, and he didn’t have a single blown block.

It was a quiet day statistically for the 49ers running backs. Kittle actually forced the most missed tackles with two. There were only two open-field opportunities, both by Matt Breida, and he won one of those. Breida has been very good this season, though.

This chart of RB carries only is very alarming for the Seahawks. The fumbles have hurt Carson's EPA, but he also has the worst success rate (% of positive-EPA plays) listed here pic.twitter.com/IazIIbIYAt

Secondary put on a show

The Bengals had a 34% success rate on offense last week. There was no way the 49ers defense were going to be able to sustain that. Well, this week the Steelers offense had a success rate of 39%. Last week was the defensive line getting after Andy Dalton. This week the secondary played one of the best games from a team standpoint that I’ve seen.

What makes these defensive performances so impressive is that the Niners aren’t dialing up these exotic blitzes to create pressure. They just have better players, and it’s showing. The defense only blitzed eight times. Mason Rudolph was standing back there waiting and waiting for a receiver to shake free, but it didn’t happen.

Less is more for Dee?

Dee Ford elected to forego having surgery until the season is over. He was limited to 16 snaps on Sunday, and he had two wins. One of those was a sack, and the other forced Rudolph to leave the pocket and throw an interception. That is what we call an impact player.

One thing that has been consistent with the defensive line is their role players have been great in each game. D.J. Jones single-handedly blew up a couple of run plays where he beat a double team and made a play. Ronald Blair keeps winning, but it’s the Bosa show.

What makes Bosa dangerous is he can beat you inside, outside, and if he wants to he’ll mess around and go right through you. needs to start finishing though. pic.twitter.com/VfTCCND0Wj

Bosa is relentless. Alejandro Villanueva has made the Pro Bowl in back-to-back seasons, and Bosa made him look like a rookie. You’ll hear plenty about the 49ers beating bad teams. I look at this: The defense is dominating and their two key acquisitions, Bosa and Ford, have yet to play a full, healthy game together.

Bosa does need to finish. He also needs to be more under control, as the Steelers took advantage of his aggressiveness on a couple of runs and reverses where he was out of position. Bosa should be among the league leaders in sacks, which is silly to think about if he could bring down the quarterback.

Tarvarius Moore’s angles are giving Jimmie Ward an opportunity to take his spot. I say opportunity because Moore continues to make significant strides in coverage. The 76-yard touchdown comes to mind, but these are the plays that are showing up weekly that he needs to fix.

I love the aggressiveness. He fills the alley, now it’s a matter of being under control.

Swarming in the secondary

Saying the defense will miss Ahkello Witherspoon qualifies as the early understatement of the year. He’s been phenomenal. On that touchdown to JuJu, that’s a gamble he can’t take when Witherspoon elected to leave his feet. If he stays on his feet, he tackles Smith-Schuster, and the Steelers likely don’t score.

This was the first game where I felt like Sherman looked like he was “back.” Sherman was aggressive in coverage and sitting on routes.

For a team to go an entire game, and only allow three catches where they weren’t in a position to make a play is spectacular. That tells me the back seven is on the same page. This play is a great example:

This is how a D plays together to shut plays down.

JuJu = 1st read (crosser), but Warner carries him. When Moore sees he doesn’t have a no. 2 to his side, he helps.

That’s all the time needed for Bosa and Armstead to affect Rudolph. pic.twitter.com/IS12bJ6wr2

When the 49ers ran man coverage, they were plenty good. It’s these zone matches that Joe Woods has implemented near the goal line that makes it difficult to complete a pass. Moore told me that this is what the defense leans on when the offense gets into the red zone. You don’t get credited stats for these plays, but being on the same page, trusting and helping your teammates, and doing your job goes a long way.

Jaquiski Tartt is such a good football player that won’t get the recognition he deserves, but there are about 10-15 plays a game where he makes you shake your head(in a good way.) His understanding of football makes Tartt enjoyable to watch.

Let’s give the linebackers some love here as well. Fred Warner allowed three catches, but two of those were not successful. Kwon Alexander is a missile that flies around and makes plays. For what Robert Saleh needs in this defense, you’d be hard-pressed to find a better duo.

The 49ers have the second-best defense in the NFL through three weeks according to Football Outsiders DVOA. They’re not clicking on all cylinders yet. Once they are, lookout. This unit deserves a ton of credit.

Century Links 9/20: Will Dissly making a a Strong Comeback

Daniel Jones’s Legend-Making Debut Shows We All Know Nothing