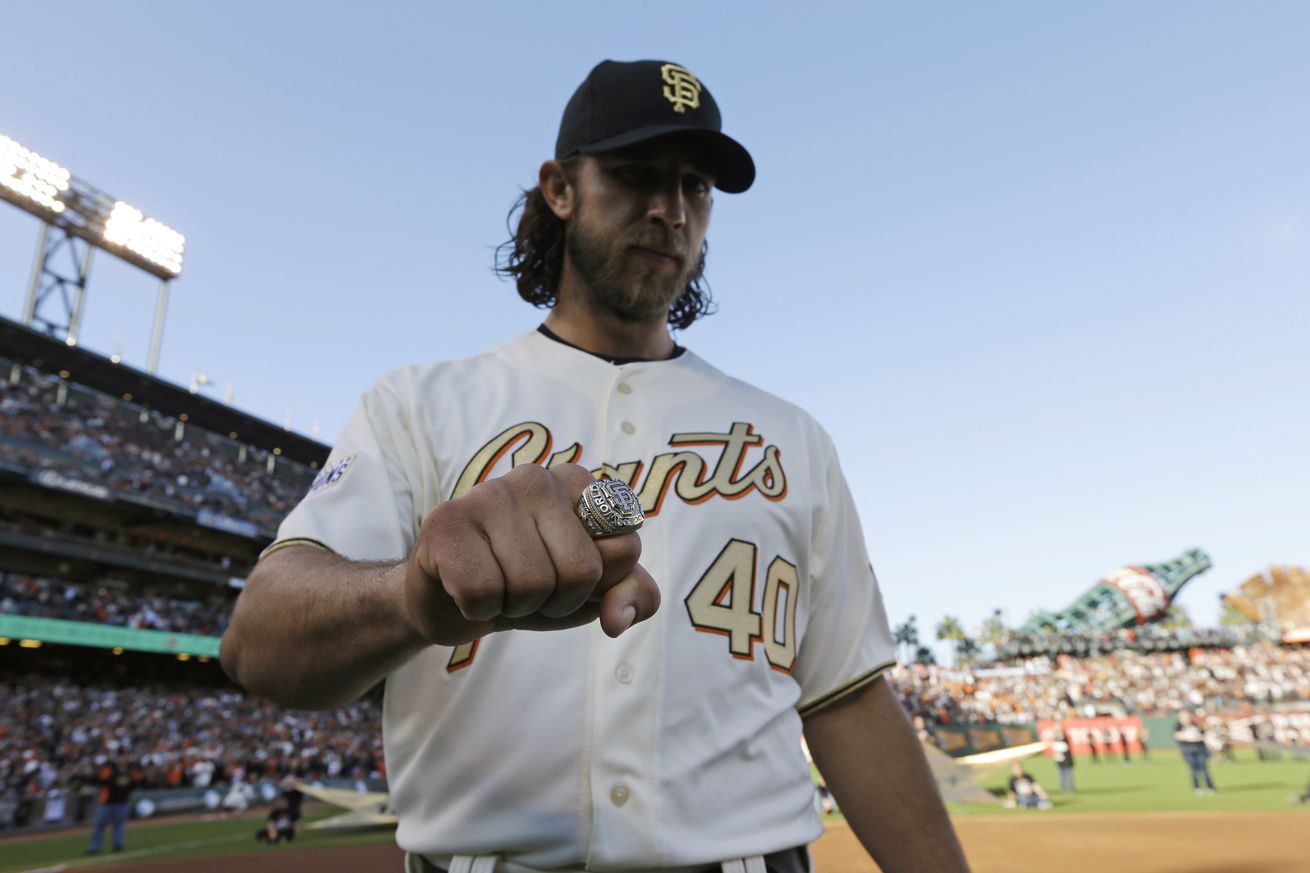 After proving himself the best of the Cain, Lincecum, and Bumgarner trio, Bumgarner deserves to be cast in a new trinity.

Madison Bumgarner was third and final piece of the Tri-Force that included Matt Cain and Tim Lincecum. Those three pitchers guided the Giants through a golden age of prosperity, an age that has long since passed. Lincecum and Cain are both out of baseball, but Bumgarner is still here. At what might be the end of his Giants career, it has become clear that Bumgarner was the best of them. Bumgarner hasn’t won a Cy Young. Bumgarner hasn’t thrown a perfect game or a no-hitter. He’s never even started an All-Star game. (He did win a World Series by himself which is pretty good, too). He didn’t burn as brightly as his cohort, but he hasn’t crashed as hard either.

This year, Bumgarner passed both Lincecum and Cain on the all-time Giants strikeout leaderboard. He passed Matt Cain on the bWAR leaderboard.* For the traditionalists, he’ll end with a better ERA and more wins than either Lincecum or Cain.

*If you only look at pitching WAR. Adding offensive contributions, Bumgarner passed Cain in bWAR a long time ago.

There’s no question that Lincecum at his peak was better than any of them, but Lincecum didn’t have the longevity that Bumgarner has had. In the end, Bumgarner easily comes out as the best of the three. Bumgarner doesn’t just belong in a trinity with Lincecum and Cain. He deserves a spot among the greatest three pitchers in the San Francisco era along with Gaylord Perry and Juan Marichal.

By bWAR, Perry and Marichal are the two of the three best Giants starters since 1968 and Bumgarner is sandwiched between them. Granted Marichal still has a considerable lead on either of them because Marichal played all but two seasons in San Francisco.

Looking at era adjusted rate stats, Bumgarner’s career looks right in line with Marichal’s and Perry’s. K%+ and BB%+ measure how well a pitcher’s strikeout and walk rates compare with his contemporaries. Higher K%+ values are better for pitchers while lower BB%+ values mean a pitcher was better at avoiding walks.

Bumgarner has been better at striking out batters relative to his peers than Perry or Marichal. Marichal has him beat on walks and Perry suppressed home runs better than any of them. Bumgarner though isn’t last in any category, so at the very least he deserves to be in the conversation when we talk about the greatest starters in the San Francisco era.

An obvious caveat is that we don’t know what the second half of Bumgarner’s career will look like. He’s yet to fully enter his decline phase and Marichal still comes out a bit better. Bumgarner hasn’t reached the highs that Marichal had at this point in his career, but he outpaces Perry slightly. Perry, however, didn’t have his best seasons until he left the Giants. Perry pitched for 12 more years and wound up with 90 bWAR, a full Lincecum better than Marichal.

A less obvious caveat is that Bumgarner only maintains the WAR lead on Perry because of his offense. Bumgarner has been worth about four wins with the bat, but Perry got dinged for -2.8 in a Giants uniform. If you want to say that through the first 10 years of his career, Perry was the better pitcher, I would agree with you. But I don’t think that we should ignore offense. If offense didn’t count, we might as well implement the DH. I think we can say that Bumgarner has been the better baseball player as a Giant.

So far though, Bumgarner has kept pace with both pitchers. The odds are against Bumgarner finishing with a better career than either Perry or Marichal (unless he goes to the Astros and they turn him into Gerrit Cole). But if Bumgarner is only the third best pitcher to play for the San Francisco Giants, I’d say that’s a mighty fine career.

Flashback: Not the first time Seattle bungled a home game vs. Saints

The Daniel Jones Era Is Upon Us, the Aging QB Fallout, and Jalen Ramsey’s Future