All-22 Musings: Eye-catching plays from the Seahawks’ Week 3 loss 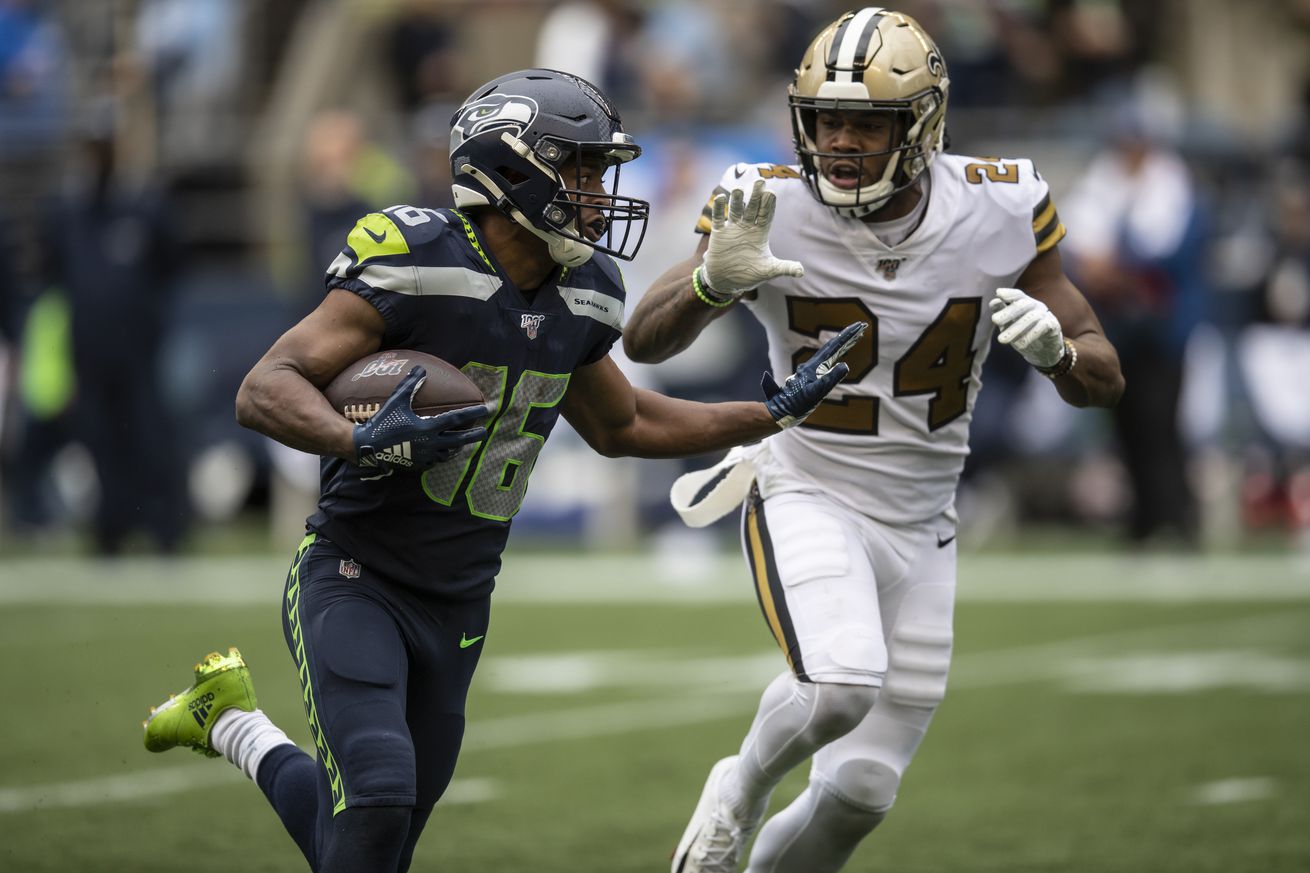 The Seahawks returned home in Week 3 only to pick up their first loss of the 2019 season. In a moment of coach speak after the game, Pete Carroll referred to it as “just one of those days,” and for all of Seattle’s systemic issues, he’s right; a couple of special teams errors and a couple more fumbles sank them on the day. In this week’s All-22 Musings, we’ll start with the man responsible for those fumbles:

We’ll kick it off with an aesthetically pleasing four yards. It’s a good job by Justin Britt to sustain his block inside, Carson bounces it to the outside beautifully, evading A.J. Klein who is in pursuit—and the hurdle is glorious to watch from this angle. The ease with which Carson hurdles defenders is something to behold.

David Moore made a near-immediate impact in his 2019 debut with the 29-yard gain here. Moore gives Marcus Lattimore a great stutter step to at least manufacture a tiny bit of leverage, and give himself a chance to win it one-on-one—which he will always do, playing above the rim like that. Moore proved to be an excellent contested catch receiver in 2018, and if he can slide into three receiver sets with DK Metcalf and Tyler Lockett, the Seahawks will have a receiver group with a complete skill set.

It’s been three weeks of Jadeveon Clowney’s Seattle career, and every week he’s been inches from a highlight play that showcases his ridiculous physical ability. That was the case here, where a stunt from the edge almost puts Larry Warford on his backside. Clowney plays with just tremendous power. That highlight play is coming very soon.

Have to skew negative here, because this playcall is inexplicable. It’s two-on-two on the left side, the offensive line isn’t supposed to get out in front to block, and Metcalf isn’t supposed to block either. Later in the game, the Saints gained an easy nine yards on a bubble screen to Alvin Kamara, because they had a three-on-two advantage. To call this play and throw this ball as an offense, you have to have the numbers in your favor, otherwise it’s a pointless and dangerous throw.

Wanted to highlight this play because it’s a great example of: 1. Fantastic recognition of the scramble drill by Lockett, and 2. How explosive a Wilson led offense can be when the play breaks down. On a broken play, the Seahawks gain 32 yards and set up a touchdown. The Wilson-Lockett connection continues to thrive.

Germain Ifedi has been—fairly and unfairly—harshly criticized this season, after at least slightly quieting the critics in 2018. In fairness to Ifedi, he gets all the credit for springing this Carson run. First helps Mike Iupati by chipping Cameron Jordan, before sealing out A.J. Klein as Carson marauds into the second level.

Back-breaking penalty aside, Al Woods continued the strong start to his career in Seattle in Week 3. Woods gave Erik McCoy his “welcome to the NFL” game, pushing the rookie center off the line of scrimmage consistently. Here, it results in great penetration off the snap to force Latavius Murray off his track, and allows the Seahawks to swarm for the tackle for loss.

Of course, this play ended up as a total disaster for Carson and Seattle. But, I’d be remiss if I didn’t highlight just how phenomenal Carson’s jump cut, and subsequent burst, is prior to the fumble. It’s Carson’s ridiculous physical ability—on full display here—that gives him so much leash even when he’s turning the ball over.

After the game ended on Sunday, there were screenshots going around Twitter of this play, seemingly showing that Carson made the incorrect read and cost the Seahawks a first down. Judging plays off screenshots is always irresponsible. That holds true here. Yes, a gap opens up, but no, Carson doesn’t have time to read and react—it occurs as he is making contact with a pile of players. Carson’s jump cut ability is showcased on the play shown before this; if he had the time, he would’ve made that cut.

This Kamara touchdown is incredibly frustrating for a number of reasons, but Bradley McDougald’s role in particular draws ire. McDougald does everything right on this play; he reads it well, takes a perfect path to the ball and evades a blocker—then tries to put his shoulder into Kamara. It was an inexplicable decision at that moment, and it cost a touchdown.

(An aside: Clowney’s terrific awareness at the line of scrimmage has been highlighted in this column a few times now, and it almost paid off again here. He recognizes the screen being set up and tries to turn and chase Kamara, only to slip.)

It was an extremely frustrating end of the second half, yes. But it’s worth highlighting a couple things with Metcalf: That 10-yard cushion he is given sure disappears in a hurry; and further signs of Metcalf playing with recognition of Wilson and the scramble drill.

Pete Carroll—maybe rightfully—caught a lot of flak for saying he wasn’t expecting an explosive play before half-time, but it’s because an “explosive” play wasn’t called here—it was created by Metcalf’s recognition. There was no real downfield element to the called play. Had the pass protection not broken down, Wilson is likely completing this pass to Lockett on the sideline with five or six seconds left. (Though to be clear, Carroll absolutely should’ve called timeout prior to this play.)

It’s a shame Wilson short-armed this throw to Will Dissly, because the design and deception on the play was fun. Had the throw been on the numbers, it could’ve gone for more and even a touchdown. Still, particularly after the misguided quick throw to Lockett shown earlier in this column, nice to see such a strong play call.

In case anyone was left wondering why the Seahawks continue to believe in CJ Prosise, this is why: Allows Seattle to isolate a non-athletic linebacker on the perimeter, and then Prosise eats his lunch on a double move. A beautiful, crucial chain-moving completion.

If the Seahawks had pulled off the comeback, this would’ve gone down as the quintessential K.J. Wright play: Isolated one-on-one against the most inevitable wide receiver in the sport, he reads it perfectly to make a massive, perfectly timed play. It has been fantastic to see Wright hold off Mychal Kendricks and remain Wagner’s running mate, and play to his best through three weeks.

In Week 2, we had Al Woods moving down the line of scrimmage to engulf James Conner at the line of scrimmage. This week? It’s Poona Ford with some quick feet to meet Taysom Hill on the outside and send him quite a (comical) distance. Once Jarran Reed returns, Seattle can feel really good about their defensive tackle depth.

It’s time to safely feel highly optimistic about the growth Rasheem Green has shown from year one to year two. This is downright Michael Bennett-ian, impossibly knifing through a gap, blowing up the run and creating a tackle for loss in a crucial moment. (Reminder: Draftniks were shocked Green left USC when he did, certain he needed another year. The Rasheem Green of 2018 wasn’t ready for the NFL, and he had his development halted by an injury. Be excited about his trajectory now.)

Yes, it was rapidly approaching garbage time, and yes, the Saints were playing soft coverage, but I present: How to create separation from a safety playing the deep middle, by Tyler Lockett. He is an impossible cover at the best of times, and this is a fun one to watch on a loop.

The Seahawks will head back out on the road to try and get back to their winning ways in Week 4, facing the Cardinals in their first NFC West matchup of the 2019 season.